Is Your Head in The Clouds? 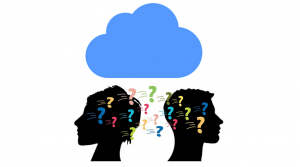 Cloud computing – storing data and using application software “out there” in the cloud of Internet servers – is becoming more and more common.  But are they safe? Can you trust some company on the other side of the wire with your business or personal data? Can you depend on software that isn’t on your computer to be available when you need it? What are the risks of cloud computing, and how can you mitigate them?

The first risk you run is being cut off from your computing resources by some breakdown in communication between you and them. But that’s rather unlikely, really. The Internet was designed to route data around broken communication lines, crashed routers, and other obstacles. Unless you live in a country with a totalitarian form of government, the Internet tends to be self-healing, unlike your desktop computer. So before fuming at your cloud storage provider for going down a whole five minutes, estimate how long it would take you to obtain and install a new hard drive, then restore everything from your local backup. Half a day, at least? 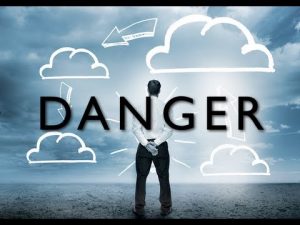 Data theft is a second and more serious risk of cloud computing. It’s not that cloud-computing providers are sloppy about security. They’re more conscientious about it than many large enterprises and most small users. But the bigger the castle, the more barbarians there are at the gates. As more companies deposit their top-secret data in cloud-computing providers’ castles, more hackers turn their efforts to breaching those high walls. It’s a never-ending battle, but fundamentally no different from you versus a lone hacker — and most home users are no match for a skilled hacker.

To those who say “I would NEVER put my files out there on some cloud server… they’re much safer on my hard drive,” I say the following: Does your home have gated perimeter access, 24×7 on-site security guards, and security cameras? Do you have a fire detection and suppression system, backup power generators, and a disaster recovery plan in the event of hurricane, flood or earthquake? Do you have sophisticated network monitoring and intrusion detection software? You can bet your cloud storage provider has all that
and more in place to safeguard your data.

Google’s Cloud Security FAQ, for example, goes into detail about how your data is protected: “Our data centers are built with custom-designed servers, running our own operating system for security and performance. Google’s 700+ security engineers, including some of the world’s foremost experts, work around the clock to spot threats early and respond quickly. We get better as we learn from each incident, and even incentivize the security research community, with which we actively engage, to expose our systems’ vulnerabilities… we undergo several independent third-party audits on a regular basis. For each one, an independent auditor examines our data centers, infrastructure, and operations.”

Government monitoring and seizure of data is a third issue with cloud computing. The European Union has strict, high standards of privacy protecting citizens against government intrusion into their personal business. Not so in the United States, where the law gives government agents enormous latitude to spy upon and seize personal data, if they can get their hands on it. Did you know that the Electronics Communication Privacy Act passed in 1986 allows law enforcement to access emails stored in the cloud for more than 180 days without a warrant?

Another important consideration is death. What happens to your information stored online in the event that you’re no longer around? Everyone should have a plan to pass along important login/password credentials in the event they die. In addition to cloud storage, make sure you think about your webmail, online banking and social media accounts.

And it’s always possible that your cloud-computing provider will go out of business. But in the event that a popular, reputable cloud storage provider was planning to shut down their service, they whould provide ample notice and opportunity for customers to retrieve their data. In the unlikely event that a cloud provider suddenly goes dark, what happens to your data in that case? My advice is to keep local backups, or use a second cloud-computing provider for redundancy.

Popular cloud storage services like Microsoft Onedrive and Google Drive will encrypt files as they travel between your computer and the cloud servers. So you don’t have to worry about some hacker or wifi sniffer peeking inside your spreadsheet as it zips along the information highway. Your files are protected by strong physical security measures, but they’re not encrypted while they’re stored on the Microsoft or Google servers in the cloud. There are good reasons for that, however. If the files were encrypted in the cloud, you couldn’t easily view them over a web interface, share them with other users or do collaborative online editing. (Boxcryptor is a third-party add-on that works with Google Drive, Microsoft OneDrive, and other cloud providers to provide “at-rest” encryption for your files in cloud storage.

Dropbox does take the extra step of encrypting user files with SSL (Secure Sockets Layer) and AES-256 bit encryption, once they’ve been stashed on the cloud server. That gives you the assurance that if Evil Hackers were able to break into Dropbox, they wouldn’t be able to read your scrambled files. But the caveat is that Dropbox itself has the decryption keys needed to unscramble the files. This quote from the Dropbox security FAQ explains why:

“We do have a small number of employees who must be able to access user data for the reasons stated in our privacy policy (e.g., when legally required to do so). But that’s the rare exception, not the rule. We have strict policy and technical access controls that prohibit employee access. In addition, we employ a number of physical, technical, and heuristic security measures to protect user information from unauthorized access.”

If you’re uncomfortable about the lack of encryption for files in OneDrive or Google Drive’s cloud storage, or you just don’t trust the server-side encryption that services like Dropbox offer, you do have another option. With client-side encryption, you can encrypt the files BEFORE they leave your hard drive, and you control the decryption keys. Most cloud backup services such as Mozy, Carbonite and iDrive offer you the option to use a personal encryption key so that your files are encrypted before sending to the offsite cloud backup, and only you can decrypt them. VeraCrypt is a free, open-source, cross-platform encryption tool. Versions are available for Windows, Linux, and Mac OS X.

Cloud computing is definitely here to stay, and its benefits are compelling. You shouldn’t avoid cloud storage services because of imagined or falsely inflated fears, but you should be ready to deal with the real risks.

Are you storing files in the cloud?