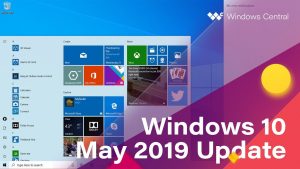 If you’ve moved on to Windows 10, you’ll want to make the most of it. Check out these new features to improve your geek-cred and productivity. Some of them require that your computer is updated with the Fall 2018 or Spring 2019 Update. If any of the items below don’t work, or don’t work as described, use Windows Update to download and install the latest updates for your computer.

(1) The Cloud Clipboard lets you have multiple items in the clipboard buffer, finally! Press Windows+V to show the content previously copied (text and images). Items in the new clipboard can be shared with other devices that are signed into the same Microsoft account. You can also “pin” frequently used content to the clipboard, so they can be re-used over and over.

(2) Improved Sticky Notes: Windows Sticky Notes is not new, but the latest update has some nice new features. Most importantly, it now keeps a list of your Sticky Notes. Previously, when you closed one, it was gone forever. You can also sync sticky notes between computers.

(3) Snipping and Clipping: Most Windows users know that pressing the PrtSc (print screen) button will capture the entire screen, and place the image in the copy/paste buffer. You might not know that you can select an area for capture with Windows+Shif-S. Drag the mouse cursor around the rectangle you want to capture and release. After using either method, the image can then be pasted into a graphics program, photo editor, or directly into a document or email.

(4) The “Get Help” app is new in Windows 10. You can open a text chat session with a Microsoft “Answer Tech” if you need help. There’s also an option to supply your phone number and have a tech support person call you at a time you specify. To open the app, type Support in the search box and click on the result. (You must be signed in to a Microsoft account.)

(5) Scrolling in inactive windows: In past Windows versions, only the active (current) window could be scrolled using the mouse wheel. In Win 10, you can scroll in any open window. Just move the mouse cursor over the window, and you can scroll using the mouse wheel, without clicking inside the window first. On my Windows 7 system, scrolling in inactive windows does work. Perhaps that because I have a Logitech M510 mouse with that functionality built into the driver software. Or maybe I’m just special. But in Windows 10, all mice are equal, at least when it comes to scrolling. If you don’t have Windows 10, and you can’t scroll inactive windows, you can use WizMouse to get the same effect.

(7) Print to PDF: a native printer driver that converts documents to PDF files has been added to Windows 10. When printing from any Windows app, select “Microsoft Print to PDF” as the printer name. Instead of committing your masterpiece to paper, it will be saved as a PDF file.

(8) The Command Prompt has been upgraded with new features in Win 10. The window can be dynamically resized, and copying and pasting to or from a Command Prompt is now much easier; the standard key combinations Ctrl-C and Ctrl-V actually work! Also, text can be made to wrap when a Command Prompt window is resized, instead of vanishing under an edge of the window. Many other Command Prompt enhancements are detailed in this Microsoft blog post. 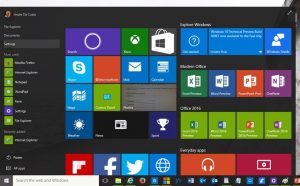 (9) Windows Update runs on auto-pilot in Windows 10, but you do have some new controls. The Professional, Enterprise, and Education editions of Windows 10 have an option called “Defer upgrades.” When you defer upgrades, new Windows features won’t be downloaded or installed for several months. Security updates will still be applied. From the Start button, type “windows update settings” and press Enter. Then click the “Advanced options” link to see the Windows Update settings. (This feature is not available in the Windows 10 Home Edition.) You can also schedule a required restart for a time that’s convenient for you.

(10) “Sideloading” apps: in Windows 8, Microsoft allowed only apps from its Windows Store to be installed. This move mimicked Apple, which allows only Apple Store apps on its devices. Security is the reason for this restriction, but the general population of Windows users doesn’t want to be deprived of all the good, perfectly safe apps written by third-parties. So in Win 10, you can “sideload” apps – that is, load them from a source other than the Windows Store. But you have to enable this feature. Go to Settings > Update & security > For developers. Then click the button next to “sideload apps.” A warning about dangers of sideloading will appear and you’ll be asked to confirm that you wish to enable sideloading; answer “yes” and it’s done. My advice is to turn this feature off again, after loading the desired app.

(11) Stylish Desktops: You can now customize the look of your desktop better than ever. Go to Start > Settings > Personalization > Colors. Choose “Show color on taskbar and Start Menu.” You can pick the color from a palette, or let Windows choose a color from your background photo to display under icons of open apps. You can also remove the translucent property of the Start Menu.

(12) Monitor Apps’ Disk Space Usage: Windows 10 will now tell and show you what apps are using the most disk space, a boon if you are short of free bytes and want to manage space carefully. Go to Settings > System > Storage. A list of drives connected to your computer will appear. Click on one of them to see how much space each app and its data are consuming on that drive. Note that you can also change the folders in which files of different kinds are saved. 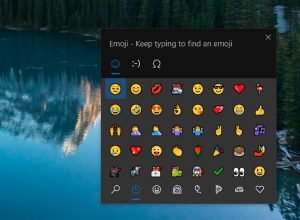 (13) My People: My People is a new feature in the Windows 10 Fall Creators Update that started rolling out on October 17, 2017. It lets you pin up to three contacts to the task bar at the bottom of your screen. Click one of those icons, and a Skype messaging window will open. (You can use Mail, or a different messaging app from the Windows Store if you prefer.) You can also drag and drop pictures onto a contact to quickly share them.

(14) Ransomware Protection: Another piece of the Windows 10 Fall Creators Update is Controlled Folder Access, which prevents ransomware from accessing your important files. This works by locking certain folders so that only authorized apps can access them. By default, Controlled Folder Access protects your Documents, Pictures, Music, Videos, Favorites and Desktop folders. You can add additional folders to protect, and specify your own trusted apps. Access the Windows Defender Security Center to tweak those settings.

(15) Emoji! We’ve gotten used to having those little icons when texting on our mobile devices, but now there’s a handy emoji keyboard built into Windows 10. When your cursor is in a text field, press WIN+. (the Windows key and the period key) to pop up a selection of smiley-faces, hearts, food, and other icons that you can paste into your messages. You’ll need the Fall Creators Update to get your emoji on. 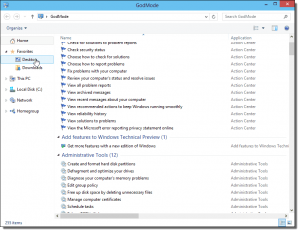 Have a great week from all of us at ZI.