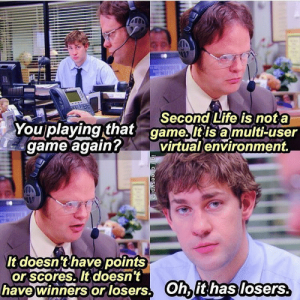 Antonio Giano recently wrote and posted this SL variation of the famous defenestration meme on a private Facebook group for Second Life users — and as you probably would have guessed if you read New World Notes on the regular, it provoked a long back and forth of outrage and argument.

Which as Antonio tells me, was what inspired him to make the meme in the first place: “As you can see, people are always fighting a lot on that topic.” In fact the post got so heated, he finally disabled his notifications.

As I observed on the Facebook post, the argument inevitably breaks down between longtime gamers who know Second Life has many similarities to many games — and those for whom SL is the first online game in which they’ve devoted serious time, energy, and emotional investment. Here’s why:

Non-gamer take umbrage at the idea of calling Second Life a game because to them, that implies their activities in SL are unserious or “not real”. Whereas seasoned gamers know that playing online worlds often leads to real life friendships and romantic relationships, not to mention real life careers.

A generational gap is at work, too, between those who grew up on games, and have always seen them as an integral part of their social lives (playing with childhood friends, college dorm mates, and so on) — and those who came upon games relatively late in life, after decades of considering games merely as “something that kids play”.

Yes, Second Life is a Game: The Final Word on a Confusing, Often Misunderstood Topic “Second Life is not a game!” has been the most polarizing, most debated, most misunderstood –and most ridiculed! — statement about Second Life throughout most of Second Life’s history. Unsurprisingly, it continues to attract much conversation, and frustration among SL users, when so many people still insist on calling Second Life as game. This misunderstanding has also caused the company that owns it, Linden Lab, to make some disastrous strategic mistakes, and ignore obvious opportunities. This post will resolve the controversy once and for all.

TL;DR, this is the correct answer:

Why and how is Second Life a game? Before answering that, the best place to start, of course, is by defining what a game is, and I think game designer Raph Koster has the best one:

Playing a game is the act of solving statistically varied challenge situations presented by an opponent who may or may not be algorithmic within a framework that is a defined systemic model. Some see this as a “fundamentalist” approach to the definition. But I use it precisely because it is inclusive. It admits of me turning a toy into a game by imposing my own challenge on it (such as a ball being a toy, but trying to catch it after bouncing it against the wall becoming a game with simple rules that I myself define).

Defined that way, it becomes obvious how Second Life is a game in a most fundamental way:

Pretending that 3D graphics are a “world” and that fellow system users are fantastic “Avatars” within it is in itself a game.

On this view, the statistically varied challenges are baked into the entire Second Life experience. The first core statistically varied challenge is to accept 3D graphics as a “world” in some meaningful way, and to figure out how to navigate successfully within it. The second is to impose that challenge on your avatar (customizing, enhancing, and ultimately mastering it), and then on the avatars of others, pretending that they embody the fantastic, flying, god-like 3D representations they present to you. From that view, you could say that the game of Second Life is competing with others to accept Second Life as a second life — and to demonstrate one’s mastery within it. Indeed, with no traditional MMORPG-type mechanics, Second Life users implicitly compete with each other by showing how well they’re able to use the UI and understand the system.

When I say all this, I’m mindful of my good friend Tom Boellstorff’s argument that “if you say Second Life is a ‘game’ then it’s hard to not classify everything humans do as a ‘game’.” For instance, Tom might argue that on my logic, money is also a game — it’s not really valuable, we just all pretend it is, and we often amass it as a way of keeping score. I believe Tom’s very legitimate point becomes shaky, however, when you consider a couple empirical points:

“Second Life is not a game” was first prominently promoted as part of a marketing campaign by Linden Lab in an attempt to encourage real world, non-game uses of Second Life. In 2005-2006, David Fleck, Linden Lab’s head of marketing at the time, announced in a company-wide e-mail that thenceforth, Second Life would no longer be called a game. (We staffers often did.) Instead, it was from then on to be described as a “platform”, open to varieties of use cases, an attempt to become the “3D web”. Up until that point, Second Life had actually been marketed as a kind of social game, and was considered a direct competitor of The Sims Online. It even launched with player rankings and leader boards. But after Fleck’s ruling, promotion of Second Life as a game ended, and Linden Lab made a concerted effort to foster non-gaming uses and investments in SL.

Which takes us to our next point:

No non-game uses of Second Life have succeeded in a substantial, scalable way.

Fleck’s move seemed strategically sound at the time, because major companies like IBM were indeed acclaiming Second Life as “the 3D web” and were planning to launch a number of non-game applications within SL. (IBM had a whole campus in Second Life, which was subsequently protested by a labor union.) If any of these many attempts had gained traction, the “Second Life is not a game” argument would carry much more weight. Despite marginal examples, however, none of these non-game uses have demonstrated any traction, and instead, only the already-existing user base, who play Second Life as an open-ended social game, remain.

And as I said, mistaking Second Life as something other than a game has caused Linden Lab to make several disastrous moves, chief among them a massive investment in SL as a real world work platform, leading directly in 2010 to a layoff of 30% of its staff:

The Dwight Schrute Echo Chamber are all the people in Linden Lab and in the company’s orbit who’ve repeated Dwight’s mantra [“Second Life is not a game!”] in various forms, until it seemed obviously true, and that a sizable market for real world applications of SL already existed. (As opposed to what it more likely is: a very interesting but numerically small niche.) This flawed assumption is probably why Linden Lab has devoted so much money, labor, and time attempting to turn SL into a platform for real world businesses and organizations.

Beyond the business uses that were tried and failed, advocates of the “it’s not a game” argument will point to the several examples of Second Life activity which seem non-game like — live music, socialization, education, and so on. But that only takes us to our next point:

Every “non-game” use of Second Life also exists in one or more self-defined MMO games.

Several other MMOs enable live music performance; most MMOs also encourage non-game socialization; Minecraft is also used an education tool, as are others, and encourage user-generated content. The MMO Entropia Universe and others allow and encourage real money trading. And so on. Without a non-game use case which is unique to Second Life that other MMOs do not have, it’s simpler and more intuitive to put Second Life within the same category as them.

Which leads to a related realization:

Many or most active Second Life users consider it a game.

If Second Life’s wasn’t a game, few would call it that. Instead, many or most active Second Life users explicitly call it a game, or at minimum, use it for game-like purposes: For virtual fashion, roleplaying, social gaming, mini-MMOs, and more — again, activity comparable to many games on the market.

So now that we’ve definitively established that Second Life is a kind of game, one question looms: So what? A core conclusion is this:

Since Second Life is indeed a game, it should be developed and enhanced by Linden Lab with that awareness in mind, becoming more and more “game-like”, with a return to achievement and ratings systems, for starters. At the same time, realizing that Second Life is a game should help the entire user base better understand what they are doing within it.

That Second Life is a game does not make it trivial, useless, or ridiculous — quite the opposite. It means that Second Life is among the many games (both online and off) where people come together from all backgrounds to find meaning and commonalities to share with each other, hopefully enhancing their life outside its magic circle.

Thanks to New World Notes and Wagner James Au for this 3 article Mashup.