This year’s first major feature update to Windows 10 (Version 1903) is expected to arrive in April. Microsoft allows some customers to delay major updates for up to one year. Are you among those chosen ones? Should you postpone major updates or let them happen on schedule? Read on to learn the answers to these and other burning questions about how to defer the Windows 10 Spring update…

Second, if you have not been updated to the last major update, then the next one will not be delivered to you, and you will not be able to install it manually. The 2018 Fall Update is Version 1809 (Each Version number consists of the year [‘18] and month [09 – September] of the update’s scheduled release). It is important to have Version 1809, else Version 1903 will not install. (You may see references elsewhere to the “April 2019 Update” or “Version 19H1” — both are alternate or code names for Version 1903.)

You can check to see if Version 1809 is installed by typing “winver” in the “Search Windows” box and pressing Enter. You should see “Version 1809” on the second line of small type, under “Microsoft Windows.” If you need to install Version 1809, use the Media Creation Tool to do an automated re-install of Windows 10; it’s the easiest and most foolproof method. You can find instructions on Microsoft’s Download Windows 10 page.

If you have the Home Edition of Windows 10, you cannot postpone major updates. Only users of Windows 10 Pro, Enterprise, and Education Editions are allowed to delay major updates, presumably because their IT departments carry more weight with Microsoft than your family does. However, some Home users might be able to upgrade to Pro for free. See the ZDNet article How to upgrade from Windows 10 Home to Pro for free for details.

According to some beta testers of Version 1903, though, there is some relief for Home users who wish to defer updates. On the Windows Update settings page, there is a new option which allows Windows 10 Home Edition users to “Pause updates” for up to 35 days. This won’t help if you’re a Home user wanting to delay the 1903 update, but it will help when the next update rolls around in the Fall.

Should you defer major updates if your Edition of Windows 10 permits it? It depends on how well Version 1809 is serving you right now. If you remember, Version 1809 rollout was kind of a nightmare. Some users lost files from their Documents and Pictures folders. Others were having audio problems, or experiencing the Blue Screen of Death. There were also some glitches in the Version 1803 (Spring 2018) update process. Those problems were eventually fixed, but Microsoft was rightly criticized for a lack of quality control. The company says they’ve taken steps to make sure that future updates are fully tested and will roll out smoothly.

I don’t feel that any of the new features in the Version 1903 Update (see below) are so important that I must have them as soon as it becomes available. So just to be safe, I will defer the Version 1903 update a few months to give Microsoft time to iron out the inevitable wrinkles. 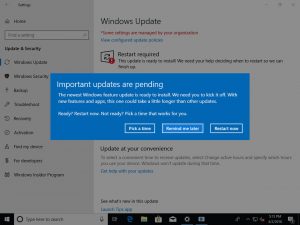 Pureinfotech has an exhaustive (and exhausting) review of all new features coming in Version 1903. Here are a few that I found interesting:

So let’s see exactly how to defer the Windows 10 Version 1903 Update, The following instructions assume you have Version 1809 (Fall 2018 Update) installed.

Option 1 lets you defer updates until Microsoft declares them “business ready.” That’s a little fuzzy, but you can expect it to give you 2-4 months after an update’s initial release. To enable this deferment, simply change “Semi-Annual Channel (Targeted)” to “Semi-Annual Channel.”

Option 2 works only on Enterprise, Education, and Pro Editions of Windows 10. It lets you add additional time to the update delay set by Option 1. You can add as many as 365 days, in which case you won’t see any major updates until mid-year, 2020.

Option 3 has nothing to do with Spring or Fall feature updates. Instead, it lets you defer important security updates for up to 30 days after their release date. I would pick about one week, giving Microsoft time to fix any bugs while limiting the time my system remains vulnerable.

If you plan to ride out the (quite possibly imaginary) storm of the update, the first two weeks of April should be a time of heightened backup discipline. Create a new System Restore Point at least once a week until you get Version 1803. Make a system image file on an external drive, or store it in the cloud. (Have you make a backup recently?)