The idea of the metaverse is getting more buzz than ever. I gave a speech on it yesterday to Sharad Devarajan’s class of MBA students at the Columbia Business School at Columbia University. (I advised them to buy Bitcoin.)

In my research for the class, I checked the metaverse’s status on Google Trends, which measures the number of searches on different subjects, and I saw an explosion in the past year or so. Big companies such as Facebook, Roblox, and Epic Games are jockeying to be the arbiter of the metaverse, and many companies are talking about their metaverse strategies.

But one 18-year-old virtual world called Second Life had everybody talking about it being a metaverse long before we entered this modern epoch. Linden Lab, the creator of Second Life (the virtual world that debuted way back in 2003) is still going strong. And it plans to play a role in the modern metaverse, thanks in part to a cross-platform payment system called Tilia Pay that enables people to cash out the virtual currency they earn in Second Life and convert it to U.S. dollars. That’s something that is critical for the metaverse, the universe of virtual worlds that are all interconnected, like in novels such as Snow Crash and Ready Player One. 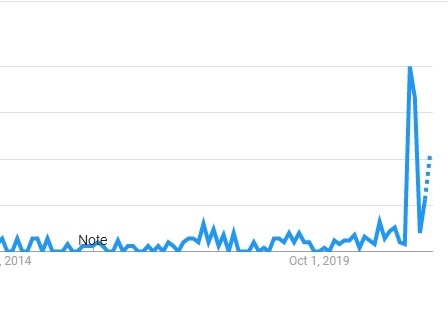 Above: Metaverse mentions in Google Trends.

In this age when we’re celebrating the “new” metaverse companies like Roblox, which has 43 million daily active users, it’s easy to forget that Second Life is still around. It has a $600 million annual gross domestic product (GDP). More than 2 billion user-generated assets have been created to date. It has 200,000 daily active users, and it processes more than 345 million annual transactions. It pays more than $80.4 million to creators annually. This is a remarkable achievement, as it’s very hard for companies that rule in one technology epoch to succeed in another, and Second Life has managed to thrive through multiple eras.

The 2nd Annual GamesBeat and Facebook Gaming Summit and GamesBeat: Into the Metaverse 2

“If you look at Second Life, what it did 18 years ago and what it’s doing now, the world has kind of come back to Second Life,” said Brad Oberwager, the executive chairman of Linden Lab, in an interview with GamesBeat. “Everybody is trying to be Second Life. And it’s a pretty interesting time. When you think of creators in the creator economy, Second Life is still the leader and people are getting direct payments from each other. We’re a true economy.” 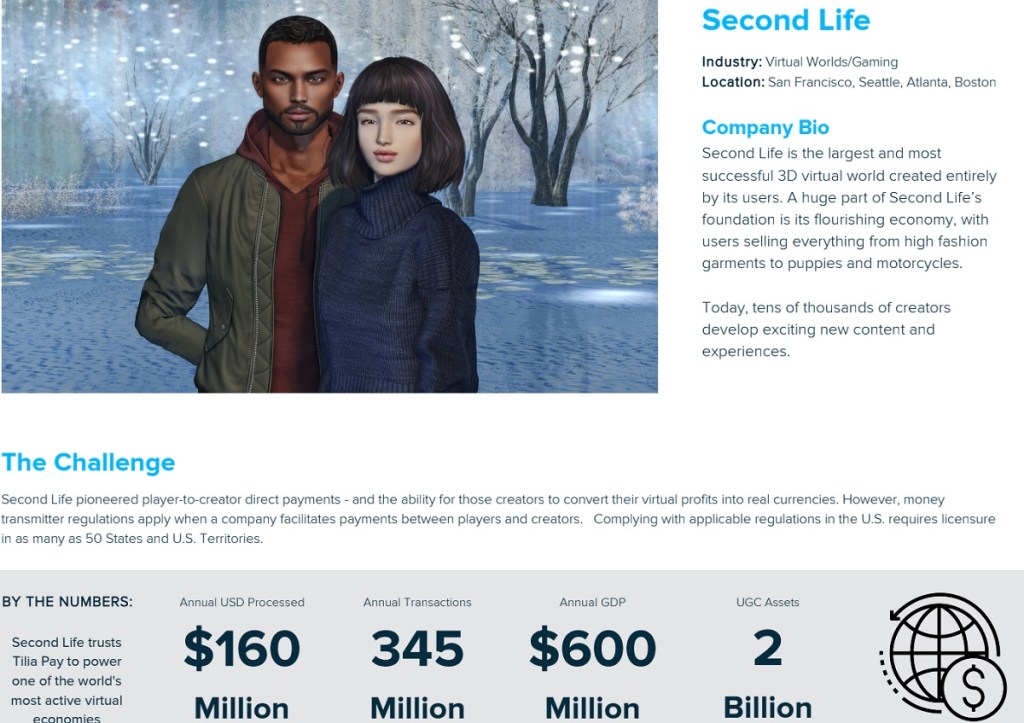 Above: Second Life has a big economy.

But Second Life, for all of its endurance and persistence, has never really become as mainstream as it could be. It has gone through multiple leaders. Philip Rosedale started Linden Lab in 1999 during the dotcom boom. And in the aftermath of the dotcom bust, he managed to launch Second Life in 2003. He stepped down in 2008, and Linden Lab went through a series of caretaker CEOs in the form of Mark Kingdon, Rosedale (who returned as CEO for just four months), and Bob Komin. In 2010, the company had some big layoffs.

Starting in 2010, Rod Humble, a former EA executive, tried to take some of the magic of Second Life and bring it into new applications on mobile and other platforms. But that didn’t work out so well, and Humble left in 2014. Ebbe Altberg took over in 2014 and helped get Second Life in good stead. He tried to create a VR version of Second Life, dubbed Sansar, but it didn’t get the intended traction. I met with Altberg several times, and he was a big advocate for how people needed to remember how successful Second Life still was.

But Altberg suffered from a long illness. He managed to get through some big shifts, like deploying Second Life to the Amazon Cloud, cutting back the staff, selling off Sansar, and eventually selling off Linden Lab to an investor group led by Oberwager and Randy Waterfield in July 2020.

Sadly, Altberg passed away from his illness in June. Obewager took over as executive chairman and noted that Altberg left the company in excellent shape. Second Life remains solid in its 18th year, with the best financial performance in the first half of the year in more than a decade. 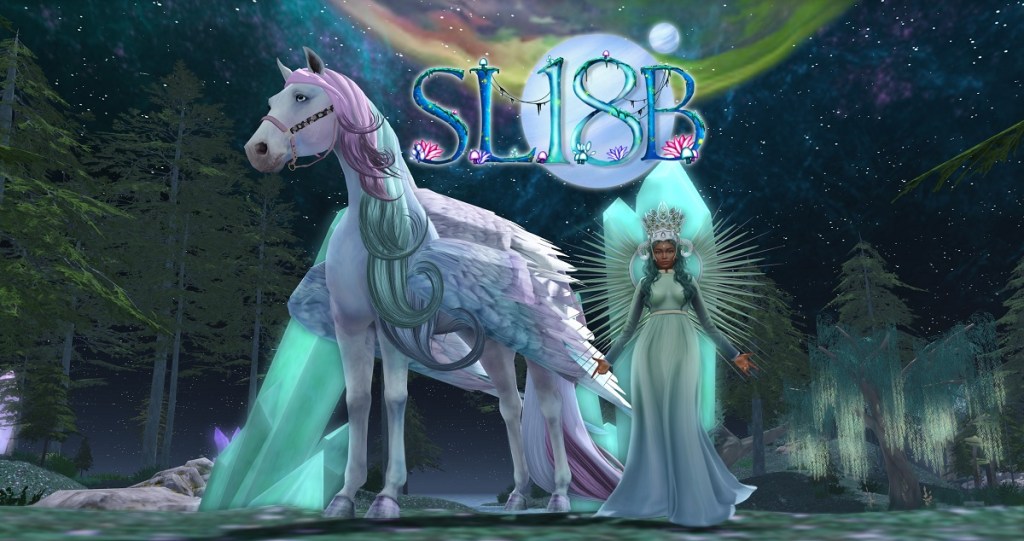 Above: Second Life is 18 years old.

Second Life has benefited from the pandemic, just like most games, as more users are coming into virtual worlds to socialize because they aren’t so sure about meeting in real life.

“Second Life is back because it never went anywhere. Just 3.5 years ago, we were the same size as Roblox,” he said. “We’re starting to grow again. Now more people are, are interacting. It’s a re-engagement strategy.”

This has potential, since more than 70 million users have created their own accounts during the history of Second Life.

“We’re not starting Second Life again. We’re just improving, we’re just focusing,” Oberwager said. “Because of all the conversations about the metaverse, our name is coming up again as the pioneer. And so our conversion rates are going up. We are a $600 million a year economy. We are supporting creators in ways that allow them to make money. Our goal is to be the least-expensive place to be a creator.”

The company supports streaming live video inside Second Life, and it has virtual cinemas where people can watch shows together. And the company has long-established practices for dealing with problems.

Linden Lab supports free speech, but it has also figured out how to deal with lawless metaverse citizens.

Second Life has long had to deal with problems like rogue user-generated content and copycats. It has its own Second Life Patent and Trademark Office that functions much the way the U.S. Patent and Trademark Office does. It uses AI to stop such theft and it honors Digital Millennium Copyright Act (DMCA) takedown requests from brands. It has undercover avatars to police bad behavior.

“We do have rules. If you break our rules, you have a problem,” Oberwager said. “It’s called the social contract. If you harass someone, you’re gonna get booted from the system.” 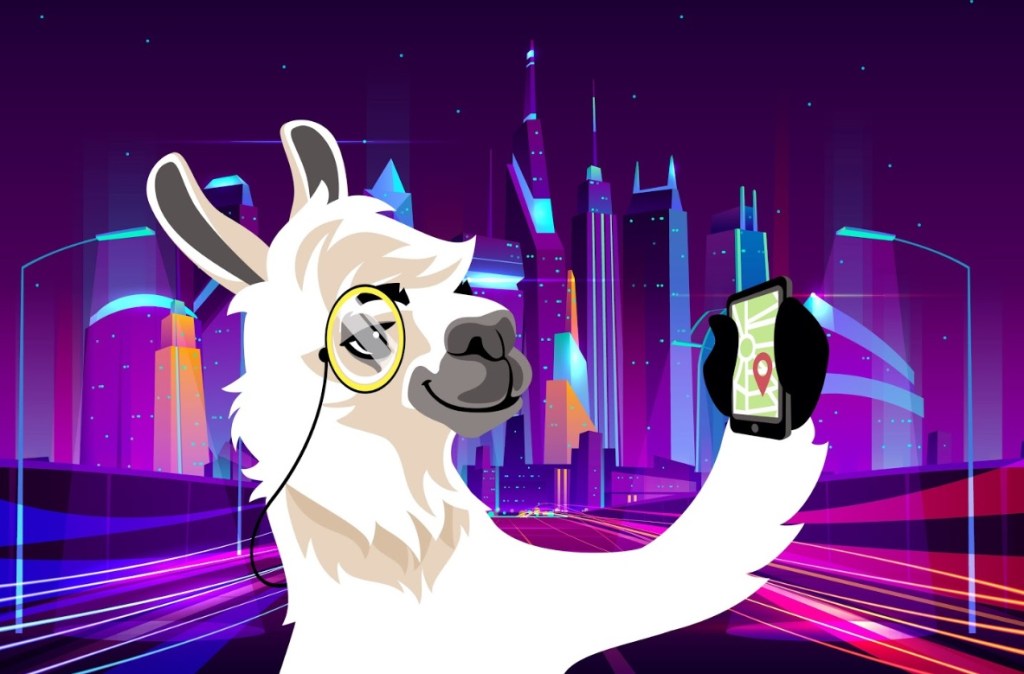 Above: Upland is using Linden Lab’s Tilia for money transactions.

Under Altberg, Linden Lab also invested $30 million in Tilia Pay, Linden Lab’s payment system, over seven years to acquire all of the necessary state licenses in the U.S. in needs to run it.

Oberwager said that Tilia Pay could power virtual economies at other companies as they try to get users to come inside and spend money in their version of the metaverse, and then enable people to take their digital earnings and cash them out. It’s a basic function of the metaverse, and Second Life has been doing this for a long time, Oberwager said.

This is not as easy as it seems. For creators to get paid for their virtual content, platform publishers must first comply with money transmission regulations. That’s because when money is being exchanged for virtual goods and cashed out by creators, the platform publisher becomes a money transmitter and must be licensed in all 50 states. This holds true for exchanges trading nonfungible tokens (NFTs) as well.

Oberwager said that Tilia is the only fully licensed money transmitter focused on the virtual currency, gaming, and NFT opportunities. The Tilia Pay service acts as a combination of PayPal and Coinbase for virtual worlds and gaming platforms by providing the “financial rails” for publishers. Using the Tilia wallet, virtual worlds, games, publishers, and NFT exchanges can legally allow creators and others to transfer virtual currencies into fiat.

One of the new Tilia users is Upland, which is an NFT-based virtual property trading ecosystem, where players can play a kind of Monopoly by buying, selling, and trading virtual properties mapped to real world addresses. Prior to its partnership with Tilia, Upland players could not sell their virtual properties to other players for U.S. dollars, because facilitating funds transfers from one user to another requires money  transmitter licenses in the U.S. and other jurisdictions. Tilia came to the rescue, and Upland has more than 100,000 monthly active users. 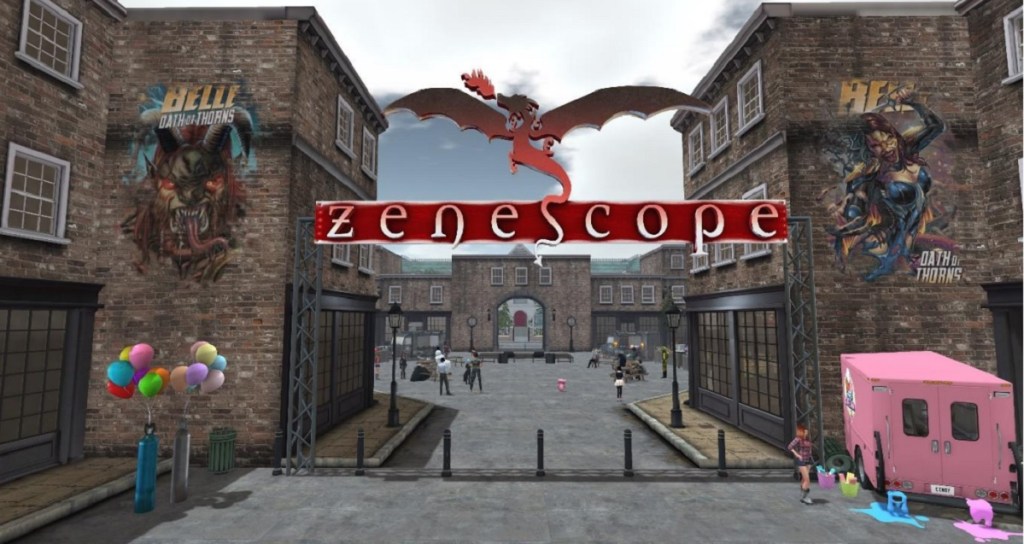 Above: The Zenescope Metaverse is new in Second Life.

Second Life has other things going on as well to try to juice user interest. It cut a deal with comic book publisher Zenescope Entertainment and licensing agency Epik to bring the dark and twisted Grimm’s Universe to life as the Zenescope Metaverse inside Second Life.

Fans can interact with and play as some of the classic fairytale characters popularized by Zenescope’s comic books and graphic novels, acting out scenarios and following different storylines. The virtual experience features Cinderella (aka Cindy): Serial Killer Princess — the main character of a six-issue mini-series of the same name. Also on hand are Belle: the Beast Hunter; the Mad Hatter, and Jabberwocky. Fans of Zenescope number around 70 million, and they now have 50 different digital items they can buy inside the Second Life location.

Oberwager said this was the beginning of many new brand and entertainment partner collaborations in Second Life. And he wants to start making some noise about it.

“Metaverses are the hot thing right now. Second Life was a pioneer, but a lot of people don’t know that it is still alive and thriving,” Oberwager said. “We had the COVID bump, like every game company. But now, we’re going up again at exactly the time when we’re getting out of the COVID bump. That’s quite compelling in our mind.”

Merry Christmas and Happy New Year To All 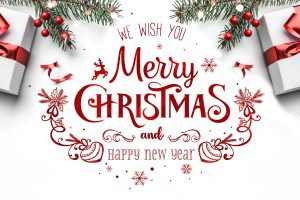