“My system seems to be getting bogged down lately, especially when I have more than one program open. And the other day I got a ‘low virtual memory’ warning. I’ve been looking into memory optimizers for Windows, but there are widely varying views as to how effective they really are. What is your opinion?” Read on for my take on memory boosters and optimizers, and why a shortage of available RAM memory might be a GOOD thing…

So-called “memory optimizers” have been around for over 25 years. These programs are also called memory boosters, memory cleaners, and other names. They claim to help your computer run faster with fewer crashes by “optimizing” your system’s RAM. But do they really do anything useful? Let’s take a look at these claims…

Memory optimizers claim to “free up unused RAM,” making it available for the applications and data that you are using. You can verify that a memory optimizer actually makes more RAM available. The optimizer itself will show you in its graphical user interface, or you can look at Task Manager’s Performance tab to see how much memory is available before and after running an optimizer.

More free RAM is a good thing, isn’t it? Well, actually, it isn’t, when it’s recovered by a memory optimizer. Optimizers recover RAM by forcing Windows’ memory manager to push some contents of RAM out to the page file on your hard drive. 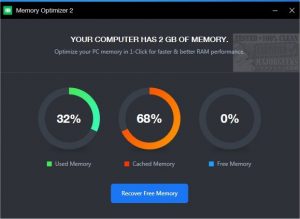 Basically, an optimizer tells Windows that it needs lots of RAM. Windows swaps the contents of its system cache to the page file and gives the freed RAM to the optimizer. Then the optimizer releases the RAM and tells you there is more RAM available than there was before it ran.

But now the contents of the system cache are in the page file. When you need that content, Windows must read it back into RAM from the hard drive. That takes much longer than reading from RAM. The result is a significant performance hit. Supposed you are working on a Word document. You switch to your Web browser for a moment to look up something on the Web. The Word program and its data are stored in the system cache temporarily. Switching back to Word is quick because everything you need is already in RAM… unless a memory optimizer has run while you were browsing.

Defrag Your RAM With Snake Oil

Memory optimizers make other claims, like the ability to “defragment” RAM. Defragmenting hard disk space improves performance by minimizing read/write head movement. But no moving parts are used to read or write in RAM, so defragmentation does not matter at all. Optimizers also claim to shut down unused DLLs that are “stealing” RAM. But DLLs are usually shut down by Windows when the programs that use them are terminated. If a DLL remains in RAM, it is in the cache because Windows anticipates that another program will need it soon. It’s true that some poorly written programs may not free up all the RAM memory they were using when they terminate, but your operating system occasionally runs a “garbage collection” routine that finds this memory and marks it as available.

If you computer bogs down when multiple programs are open, or you’re seeing the “low virtual memory” warning, you probably need to add some physical RAM memory to your computer to make it run better. 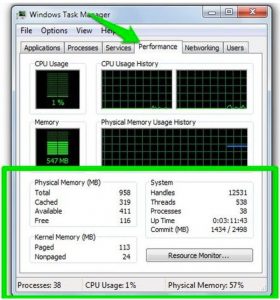 In my opinion, memory optimizers don’t do anything useful. In fact, they usually make your system run slower! You’ll find people on the Web that swear by certain memory optimizer programs. Feel free to try them if you like, but make sure the “reviewer” isn’t the owner or an employee of the software vendor, and check the reputation of the program in other places, especially if it’s not a freebie.

I would actually argue that it’s a bad thing to have lots of free RAM memory. RAM can speed up the loading of programs, web pages, and data that’s likely to be needed again soon. It’s much faster to load a cached item from RAM than reading it from a hard drive. So if your computer reports that RAM is full, or nearly so, it may just be an indication that your operating system is doing a good job of keeping frequently needed items available for quick access. If, however, your RAM is maxed out, and you notice significant lag when loading programs or switching from one to another, you need more physical RAM, not an optimizer.

Here’s my bottom line… memory optimizers do nothing useful and can actually interfere with Windows’ memory management. If there was some super secret to freeing up more RAM in Windows, it would long ago have been built into the operating system. There is no reason to user a memory optimizer. Just let Windows manage memory for you, and install additional RAM if you really need it.