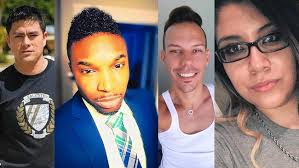 I’m not about to sit here and pick apart the political loopholes that people are beating to death about the tragedy at Pulse nightclub a couple of days ago. I’m not here to spurt out some meaningless rant about how this could have been avoided. But, I am going to talk about what happened.

What happened was an act of hate. Considering the circulating speculation that the shooter was actively involved in the LGBTQ scene locally, it also could have been a violent deflection stemming from self-loathing or rejection. We may never fully know, but we do know that it was a painful loss for the victims, their loved ones, and humanity.

We’ve become a society that is becoming increasingly numb to hatred, violence and violation of rights unless it happens on a large scale. It’s becoming harder and harder to see people as individuals because we’re getting more screen time than actual face time (and I don’t mean the iOS version). We’re at a point where acceptance and respect shouldn’t be as optional as people treat it. Social media enables us to be callous and continue the vicious cycle of ignorance and disinterest in fact-checking.

With that said, one thing I have learned to appreciate as someone who is very much part of the LGBTQ community is that Second Life does enable us to have a safe haven of sorts, even if just virtually. One of the biggest blessings that I have personally found is that there’s such a great pool of people in-world that can either relate or are totally respectful even if they can’t. Being able to meet so many people that don’t care what you look like, what you do or whom you love is such a lifesaver in many ways.

We need more of that offline, people. We need more support and learning to respect people for the human beings they are, not their differences. But, in the wake of the tragedy in Orlando, we need to rally and show support more than ever. Thankfully, someone is heading up just that in-world.

Casper Warden, owner/creator of CasperVend (which most of us are very familiar with) has not only started an in-world relief fund, but has also created a free donation kiosk that you can also rezz on your land to help the fundraising efforts. It is incredibly important to help rally together for these families, as they’re now struggling with unexpected funeral and medical costs, child costs, even pets that are now ownerless. Every little bit helps reach that goal, and I would love to see a push from the Second Life community to do just that. Links will be placed at the end of the post.

But, going forward, we need to make sure we’re taking steps to preserve the integrity of humanity. Life is too unpredictable to spend it mired in hate. Love a little more, learn to show a little more compassion and help shape our kids into people who think more than buy everything at face value. What happened in Orlando was a tragic explosion of hate, and society has long fueled it.

Let’s put this fire out and help heal the damage that’s been done.