This week we are shining a spotlight on Sam King-Slain (Dropyour.Knickers), a skilled singer, songwriter, and musician who credits Second Life for assisting his journey in self-discovery. Watch him play live at SL19B later this month! 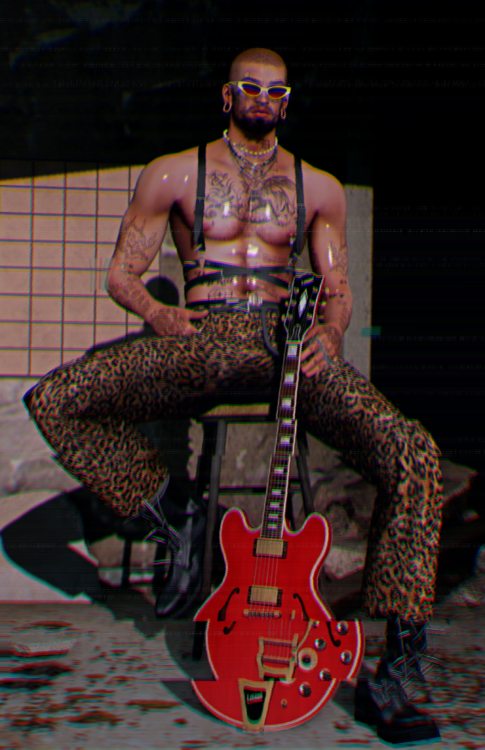 How long have you been in Second Life and how did you first hear about it?

I’m 11 years old in Second Life which makes me about 250 in SLife experience. I heard about it after me and one of my childhood friends were playing the Sims. I think we googled ‘virtual world’ and it was the first one that popped up. 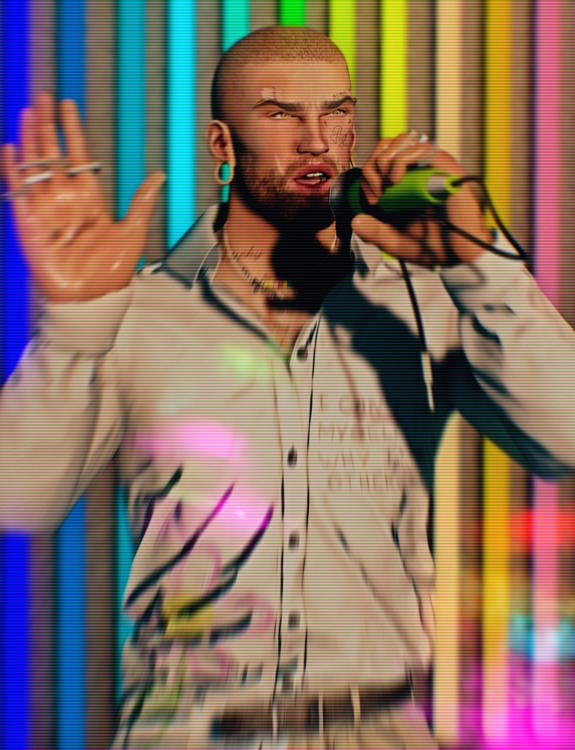 You are an award-winning musician with quite the talent for songwriting. Second Life and the humorous and perhaps frustrating situations you encounter in this virtual world are the main topic of your songs. Tell us more about your music career and how it all began.

I’ve always been into writing songs, raps and poetry so it wasn’t totally out of character for me. But roughly 5 years ago, myself and a few close friends were hanging inworld at a recording studio and it just struck me how funny it would be to write something about Second Life. I remember saying brb and 20 minutes later I jumped on mic like ‘I gotta show you guys what I’ve done!’

That was the day I wrote my first song ‘TP Me‘ and the chorus was literally ‘tp me, tp me, I’ve got a platform in the sky’ and everyone had it stuck in their heads for weeks! I think we all knew we were onto something and I just knew I could write more so I went away and wrote ‘Relog‘, ‘Crosshairs‘ and ‘Prim Love‘ and with each song just came more laughter and enjoyment. It was those guys that said ‘Sam we have to do a concert’ and that was when we set up a little warehouse sky box and threw our first show – I felt like a true Second Life Pop star, with my name in lights and it was a hit!

My friends had made merch and set the stage up and we felt like we had really injected the fun back into Second Life. It ended up with us having a full sim with a Record Label Office and a venue and we started going around inworld to all our favorite spots asking if I could do a show. It was hard to get people to buy into the vision but I knew all I had to do was convince them to listen to one song and they got it. 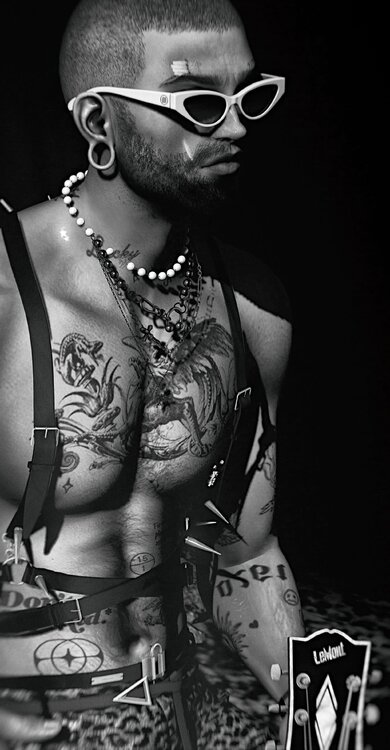 Do you play any musical instruments and how do you compose the music for your songs?

I have played the guitar and saxophone from a young age in real life. My song writing process is usually quite simple. I’ll feel inspired, go away, and find a beat or play a tune on the guitar and then record and write simultaneously until it’s done. It’s very rare that I’ll step away and come back to a song. If I feel it then, I just have to write something in that exact moment and I have to finish it then and there. 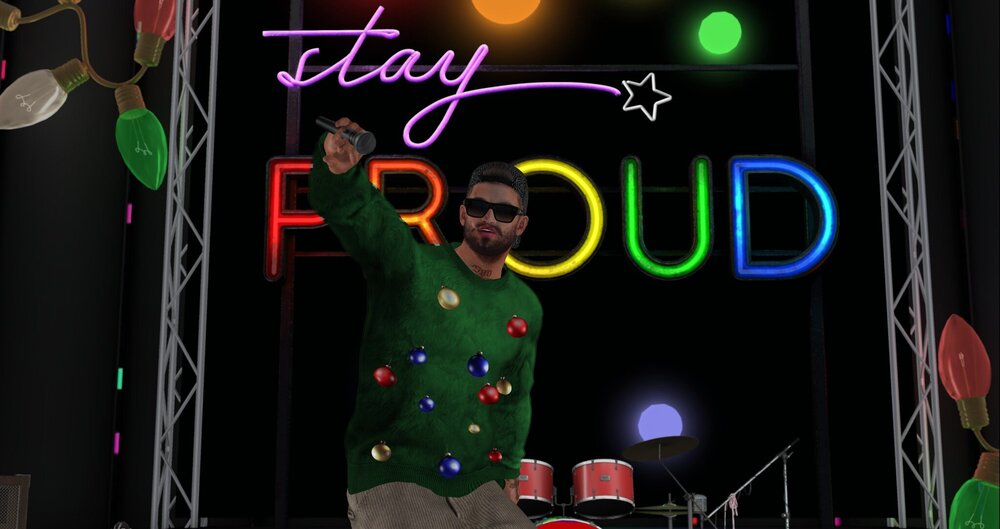 What genre would you say your music falls in, and who are some of the musicians that have influenced your style?

I would say my genre is varied, like my music taste. Sometimes I rap, sometimes I’ll do an acoustic song or something on the piano, and sometimes I’ll do something people can dance to. Overall for Second Life, I like to keep my music light hearted, fun and relatable. Some musicians I look up to are J Cole – a lyrical genius, Drake, Bon Iver, Beyonce, Juice WRLD & Lil Peep. I’d say my acoustic music is heavily influenced by Ed Sheeran – gotta keep it in the UK! 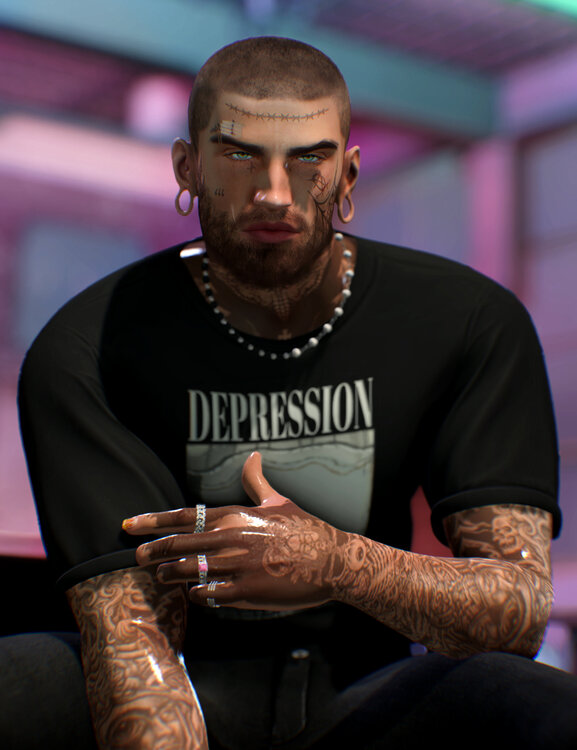 One of your songs reveals how Second Life assisted in your journey of self-discovery. Can you share in what ways SL has impacted your life?

Second Life has saved my life in a lot of ways. I’m from a conservative quiet town on the South Coast of England and being myself was pretty much out of the question as a kid. I struggled with my gender identity and Second Life gave me a means to explore that. I met the love of my life (we’re back together now 10 years on!) and that taught me things about my sexuality. It’s funny because in a game where you can be literally anyone – it has given me confidence to be my true self. I have met so many wonderful people from all different walks of life and it has inspired an abundance of self reflection and growth. I’m proud of my gratitude towards Second Life and I never shy away to say how much I appreciate the game – it really is whatever you want it to be. To some it’s just a game but to me it’s the place I’ve expressed my most authentic creativity and made genuine, life long connections and friendships. 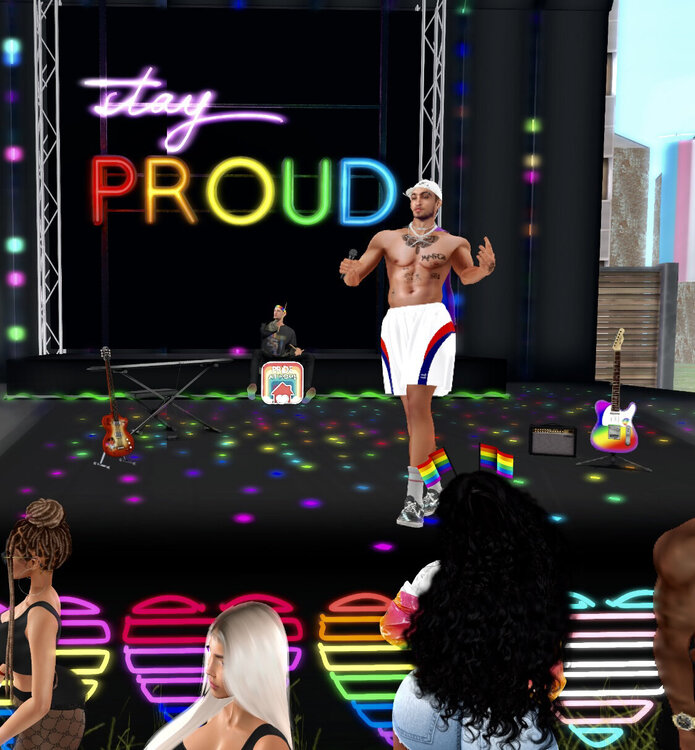 June is Pride month and in Second Life many members of the LGBTQ+ community find this to be a safe space to express themselves and feel empowered. You have been very active in Second Life raising awareness in the past, can you share more about that and if there are any activities or events that you’ll be taking part in during this coming month?

Last year I wrote a song “SL Pride” which sort of depicts why pride is so important to me and how Second Life has helped me along the way. I won’t go into much more detail than I did above because I’m much better at singing out my words than speaking them.

Last year I did two big Pride performances – Burrow & Co for SL Pride and Pride at Home run by Tink Hax. Both events were hugely successful and we raised a load of lindens for various LGBT charities with a variety of really talented people. This year I’m booked for two Pride shows so far – Pride at Home and one at a fairly new venue called Eleventh House.

Tell us about some of the other Residents in Second Life that inspire you and whose work you admire.

Someone who believed in me at the start of my SL music journey when no one did is DJ Gracie (Gracie Barbosa). Not only is she one of the most talented DJ’s on the grid, has come to every show of mine and performed along side me, she has also created The Little Tokyo Rooftop which is home to the Dream Team – a collaborative of creative artists who bring love and good vibes to the grid. Gracie is very humble about what she has created on SL, but the sim is free for all and she is always making rl donations and sending out school supplies to kids in Africa. Lil Tokyo Rooftop does a Bumpin’ Brunch event every Sunday and I’d really recommend dropping down! Check out Lil Tokyo Rooftop’s Facebook page.

Another collaborative that really deserve recognition is WWBH: We Will Be Heard – Founded by Daisatella Slain, Bars Simpson, November Justice, Pinky Banks, Roshambo Dench. It’s hard to put into words what these ladies have achieved in the last couple of years. It started in 2020 with their Black Lives Awareness Event, it was so successful and raised somewhere to a million plus lindens for charity. These guys do a whole month of events, rl speakers, parties, art exhibitions, open mics, museums and raise as much as possible for the chosen cause. Last year was WWBH: Girl Power – Bars Simpson put together one of the most jaw dropping interactive inworld museum experiences I have ever seen – our whole community was involved and it showcased beautifully the issues surrounding women’s rights. I was honoured to perform in the closing show. Their next project will be for Mental Health and I am so excited because this bunch pull it out the bag every single time, truly it blows me away and I’d love them to get some coverage for their next one –  I think it’s something Second Life would be extremely proud of. You can still check out their first Black Lives Awareness website and the LinkTree to last year’s Girl Power where you can find their IG/FB and more.

I know I’ve talked for ages but I just have to give Tinkers a shout out! Tink Hax has done absolute wonders this year. He’s always raising loads of awareness to various LGBT charities, creates a beautifully colourful Pride sim for people to explore at Pride at Home and runs the Pride shop&hop. Tink created Love to Ukraine and I’ve never seen someone raise so much money in such a short timescale. They raised L$6209987 which ended up being £17,500 – an incredible amount of money which I’m sure helped so many people in such a crisis. What a guy! Check out the Pride at Home Facebook page.

Where can people see you perform or hear more of your music? Please share links to your sites, social media accounts, and destinations you regularly perform at.

I’ll be performing at Pride at Home at the end of this month, Saturday 25th June 6pm SLT. I have a good feeling about this one, hopefully see you all there!

Also just want to say although I’ve mainly stopped doing small occasions/parties, I’m always down for a good cause so I will happily come perform at your event if it’s going to charity!

And Linden Lab, if you ever want me to jump up on stage at one of your big Second Life events, just say the word and I promise I’ll keep it PG!

Sam has graciously recorded a PG version of his song, Relog, for us. Watch the music video on our YouTube channel.

We hope you enjoyed learning more about Sam’s many talents and enjoy his music as much as we do. We’ll see you at SL19B listening to his live performance!