SL STAND FOR UKRAINE is a new Flickr group devoted to Second Life images created in support of the Ukrainian people during Russia’s invasion of the country –click “Add Photo” to contribute your own.

Second Life artists can be counted on to respond to important world events. Milena Carbone captures the Russo-Ukraine War perfectly with the single word, “Madness” since it surely is madness for Putin to assume people will cede their autonomy on his say-so.

In the image comments, she explains her use of the swastika and how it is completely justified: Putin’s favorite advisor Aleksandr Dugin is proudly fascist. One of the three books Putin insists people in his circle is by Ivan Ilyin, another fascist. I think when Putin claims his mission is “de-Nazification” of a country that is led by a Jewish president it is clearly pretext. Milena’s picture is a potent example of symbolic imagery, the bleeding heart, the colors of the Russian and Ukrainian flags. You can get a free copy at her gallery.

For more support for Ukraine I think Kyle Racho’s “no title-no comments” is magnificent. It’s basically simple, a blue and yellow projector illuminates him and the backdrop, forming a Ukrainian flag. I think it is important that he is not wearing clothes, there is nothing between his humanity and the war. War is always waged on humanity, on our bodies and our sense of ourselves. There is nothing between him and the truth, no shelter, no escape. He also has a lot to say in the description. All three artists wrote about the war with conviction and honesty. You should read them all. 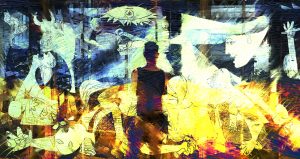 Centrax Runner’s Guernica 2022 took my breath away. For me, Picasso’s Guernica is the most powerful anti-war painting ever made. I love that Picasso remembers the nonhuman victims of war, the animals. Picasso used whites, grays, and blacks to make a subdued and colorless painting. He even made a point of using matte paints so there was no gloss. In a way it feels “wrong” to see the colors of the Ukrainian flag overlaid on the painting, but then war is blasphemous, isn’t it? The man viewing the painting stands still and strong, but I have to ask. Is that a gun strapped to his leg?

Centrax is doing more than creating photos. His country is hosting refugees fleeing the Ukraine and he is doing his part to help. He is also a one-man online disinformation disrupter. I will let him explain:

I send private messages to Russians, in Russian, via FaceBook informing them about the facts – crimes committed by their military and the losses of the Russians. Their mothers do not even know that their sons are dying attacking a neighboring country. The Russians are cut off from information and live in the information bubble of Putin’s propaganda. And I call them to protest, to overthrow this war criminal.

I’ve already sent hundreds of messages and won’t stop until this nightmare is over.

These and other pictures can be found in a new Flickr group: SL Stand with Ukraine. Be sure to check them out. If you want to make your own image for Ukraine, please add it to the group. There are also a few people curating galleries of anti-war imagery. Beatrix Wallace has Stop the War and Decadence has Peace Not War.