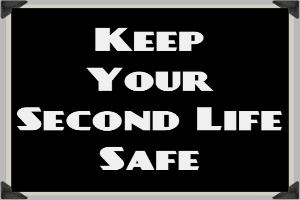 Online safety is just as important in Second Life as it is anywhere else. While Second Life itself ensures a lot of safeguards and TOS to keep things streamlined, there are a lot of instances where a user may learn the hard way that there are simply some unsavory people in our blissful virtual existence. So let me share some tips on how to avoid some common scenarios and ensure your Second Life is even safer.

Catfishing is very common in Second Life. Now, I am well aware that Second Life is a place of escapism for many. Many people want to be whatever and whoever they want to be. However when you’re finding that someone wants to get to know you on a more personal level, it’s sort of important to ensure that what they’re sharing is accurate.

I had learned the hard way that people will seriously put on a false persona not just in Second Life, but also falsify their real lives as well. In one instance a few years ago, I spent two months involved with someone in Second Life that pretty much lied about everything. Had pictures of themselves “real life”, a whole backstory, job they didn’t really have, etc etc. However, I noticed that they would never talk on voice (and always had a reason not to) so when I pushed for them to meet outside of the game, of course they went running. Ultimately my gut instinct proved to be correct.

Here are some simple ways to ensure that the person you’re talking to isn’t putting on a show about who they really are:

• Have them speak on voice. If they are unwilling to speak on voice, there is a good chance they’re hiding their real life gender and/or real life relationship status. In rare cases, they could also be hiding that they’re not the age they say they are (I’ve heard of spotty stories where minors have hopped onto other people’s accounts).
• Skype is a wonderful thing. Ask them to do a Skype video call. Again, this is appropriate where someone is claiming they want to invest time with you and claim there’s potential outside of Second Life. This way, you can see that they are who they say they are.
• Did they send you a picture? Reverse search the image to make sure they didn’t steal someone else’s. Ultimately, this was exactly what I did to nail the person I was speaking with. I found out they were the opposite gender from what they claimed, and that they had been stealing pictures from some poor college-aged sap. Go HERE to upload and reverse search an image.
• If they’re local to you, ask them to meet up in a safe public place. Not many will have this option, but a request to go for coffee could confirm or eliminate any worry.

2. The Scammer
One thing that happens too often is that you meet someone that seems like a decent person. Within a few weeks they become “good” friends or more and then….BAM! They suddenly have some life altering crisis where they are financially strapped. They may start asking you for money, Lindens, things to be sent to them.

Honestly, this should really be avoided unless it’s a situation where here is a supported fundraiser by a recognized group (for example, when Linden Lab’s supports a fundraiser for someone who is ill in real life) or it’s someone that you truly have confirmed everything for in the “catfish” section and have known for a while. But, in most cases, it’s a sign you need to run screaming. Panhandling in SL is otherwise a huge no-no.

And, it’s said a lot, but don’t click any mystery links in chat, profiles or elsewhere in Second Life. People have links that alter your avatar totally, mess up your computer etc. If you don’t know them well, don’t click.

This is common, this is easily avoided. There are some folks that are simply an alternative account (meaning, a spinoff of the original) and may engage in behavior geared towards taking advantage of others. Here are some simple things to check when deciding if someone’s account is suspicious:

• If they look like they are head to toe mesh and well-versed in Second Life ways (emoting, animation override, has a lot of land, heavily into breedables or some other time-intensive activity) but their account is less than 4 months old, that’s an instant red flag.
• When in doubt, ask. Sometimes people have a reasonable explanation, but generally speaking if you have to pry, it’s not a good sign. Some people do have business alts, some have ones for when they want to not be in their roleplay character, etc. Those folks tend to be straightforward about it.
• Read their profile. If they say something to the tune of “getting a fresh start” that’s a pretty blatant indication of an alt. It’s also an indication of so much drama on a previous account that they decided to ditch it and create a new one.

Never share your password. Sometimes this seems like this is in dire circumstances but honestly, I’ve seen too many people lose their entire balance, their businesses and their inventory due to trusting the wrong person with their credentials.

Those are just some basic tips to keep your Second Life safe and easy. Have you ever had a crazy experience that was a tough lesson? Any surefire ways you utilize to avoid those pesky people out to cause issues? I want to hear them!