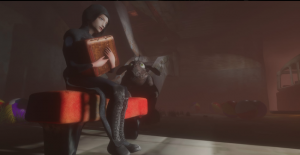 While there’s still much anger among the Second Life community about the end of Sansar as a Linden Lab-sponsored project, some readers also make a more positive point: Since Second Life is still based on an ancient graphics engine and server architecture from nearly two decades (!) ago, the company really did (and does) need to invest in developing new platforms while keeping the original one operational. As “Pulsar” puts it:

Linden Lab dumped no working product (Second Life). What’s to be “dumped” here — actually being sold — is the branch that gave no fruits… Earlier you realize it, the better. Selling it is the right thing to do, in order to not lose further money and getting something back. It’s even possible (but I won’t bet it) that Sansar, under a different company with a clear plan and finally reworked, other than rebranded, could find a niche.

I actually wouldn’t be at all surprised if Sansar does find a suitor — for instance, a Chinese company that wants a VR-optimized virtual world to deploy behind the Great Firewall. In any case, as Pulsar goes on, Linden Lab was never trying to “abandon” the Second Life customer base, but attempting to grow a new, somewhat overlapping audience with a new product:

#1. Even when your business has to deal with product obsolescence, and you need to offer a new version of your software or a brand new car, you look for costumer loyalty, not to dump them. Sure, you can’t convince everyone and some will stick to the old stuff — either from too much attachment, fear of the change or… it’s your new product that’s really unappealing, until the old one becomes unsustainable for you to maintain and support it. However it isn’t that you say “ok, now we are releasing version 2, let’s dump our costumers!” (not even Ebbe did that). Also that’s not this case. Maybe LL has failed at communicating as well as they could, but [Sansar] isn’t Second Life 2 to replace Second Life 1. Sansar wasn’t marketed as SL2 (you can argue that someone at Linden Lab, deep down, hoped for that, but another story).

#2. The current case. When a company shifts focus like this, there is a new target user in mind. You aren’t just moving from v1.0 to v2.0, you are now offering the product A and the product B. The purposes are, for example:

A) To differentiate, so you don’t have all your eggs in one basket, if a business collapses;
B) To expand your business;
C) To adapt to the new market trends, so you won’t end up like a dinosaur.

You are always taking a risk. Ebbe Altberg himself was worried that Sansar could fail, bringing down Second Life with it, i.e. a consistent part of the costumers migrating to Sansar, destroying the SL economy, then Sansar doesn’t work and the company ends up with nothing at all.

In the past, I’ve argued that Linden Lab should completely rebuild and relaunch Second Life for the modern age, making it mobile-friendly and appealing to a generation that grew up on Minecraft and Fortnite. But that strategy is at least as equally risky — and could easily cost more than the $50-60 million Linden Lab likely spent on Sansar.

Linden Lab CEO Announces Sansar Now Up For Sale; Company to Instead Focus “Entirely on Second Life and Tilia”; Philip Rosedale Not Among Returning “Heavy Hitters”

“Sadly we have decided we as Linden Lab couldn’t continue to sponsor the project financially so we’re looking for a plan B for Sansar to continue.

“I can’t say much but we’re having interesting conversations with several parties to help that project move forward… but no deal is done yet, so people will have to be patient to see what happens with it.

Ebbe then went on to address the announcement that several “heavy hitters” are returning to Linden Lab to help develop Second Life: Philip is not coming back to Linden Lab, Ebbe Altberg said, but that three heavy hitters with deep Second Life experience have indeed returned. Added Ebbe: “We’ll let them introduce themselves if they want to.” However, noted Lab Gab’s co-host, some users have already noticed long-defunct Lindens recently appearing on the grid.

Have a great week from all of us at Zi and Fi.