I’m sure by now most of you have heard about the hoopla surrounding the new Windows 10 update. This OS for PCs will be the be all to end all, and is the last version of Windows that Microsoft will release. How could that be? Well, they will begin to release updates to Windows 10 with versions, kind of like the viewers do for Second Life. For instance, Firestorm is on viewer 4.7.1 (45325), so I assume we will eventually see Windows 10.2.4.20 or whatever.

Most people who have upgraded to the Windows 8.1 have moaned and groaned about its aggravating interface. Windows 7 users seem quite happy with their version, but with the release of Windows 10, support for both Windows 8.1 and Windows 7 will eventually be discontinued. Microsoft is very focused on getting users on board with Windows 10. Microsoft insists that Windows 10 is the be all to end all of operating systems.

One of the things that has caused so much uproar is the “forced” update. Many conspiracy theorists and control freaks have a problem with Microsoft “forcing” this update on them. People worry that it is way too big brother, similar to the Xbox fiasco where they forced users’s web cam to be active and Xbox connected to the internet all the time, whether the user wanted it to or not. PC users with Windows 10 will lose control over Windows updates. The updates will happen automatically, whether you want them to or not.

Switching to Windows 10 will be optional and free for a year after release. After that, you must pay for the upgrade, which will cost approximately $119 USD. They will quickly discontinue supporting Windows 7 and Windows 8.1, because having a unified OS is Microsoft’s ultimate goal.

If you have an updated, officially registered legal copy of Windows 7 or Windows 8.1, you may have noticed the new little Windows icon at the bottom right of your computer screen. If you can see it that’s because you qualify for the free upgrade to Windows 10. Clicking that link opens a small popup that tells you a little bit about the new OS and then asks if you would like to register to receive Windows 10 on July 29. Registering will allow Microsoft to patch your PC with a few updates between now and then to speed up the full upgrade when it becomes available next month. If you’re wanting to switch that’s quite the little bonus. The big question is: will you make the switch? 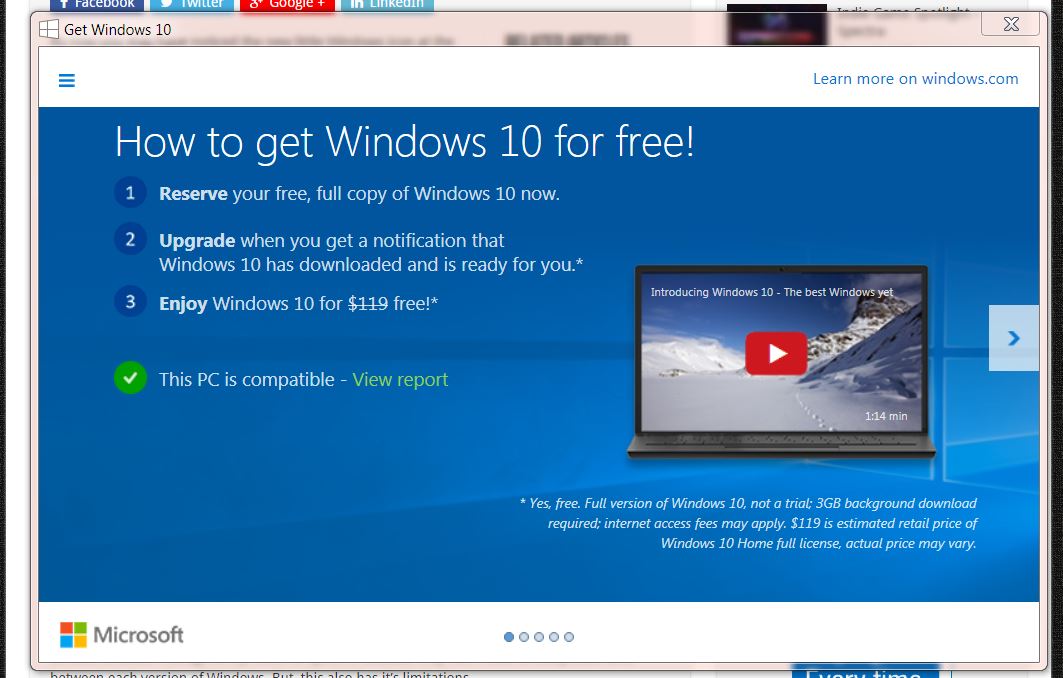 There are many pros to making the leap to Windows 10. Windows 8.1 users will be happy to hear the Start Menu will be back. Windows 10 is a little less touch-centric. Gamers will be excited to see the new PC to Xbox integration. Direct X 12 will be built into the system, which will be great for anyone that is into gaming. There is a new version of Internet Explorer, called Edge. Hopefully it will prove to be a much more viable choice in comparison to it’s predecessor. Windows 10 also adds the convenience of Cortana, which will be useful. Cortana is an intelligent personal assistant and knowledge navigator which has been on the Windows Phone 8.1 and will be added to the Windows 10 and the Xbox One. However most people are excited about the most beneficial feature of Windows 10 == the added security. With only one uniform OS, Microsoft will theoretically be able to better manage and protect its systems because they won’t have to divvy their time between each version of Windows.

So what’s the downside, you ask? Microsoft has been fairly silent on that topic. The one thing that has some users concerned is that after switching to Windows 10, users will lose control of updating their OS. Once you’re in, you’re in; you will lose a level of freedom on your system. You will also lose Windows Media Center, but there are other alternatives. In addition to this, some of the new features will have limitations.

There are obviously both pros and cons for jumping to Windows 10 and everyone will feel a little differently about it. Second Life residents worry if the SL viewers will be compatible with the new OS. The answer is yes it should be, and it should improve your SL experience. As always, though, when you install a new OS on your computer, be sure that you also update all of the drivers for your video card and other components to be sure that they are working together. Most of the problems that SL residents have with OS upgrades can be traced to faulty or incomplete installation. As Second Life users, we should be enthusiastic about the perks that Windows 10 provides in the gaming arena. It seems to be a good step in the right direction after the backlash from Windows 8.

I will be upgrading when Windows 10 releases. I’ll keep you posted!