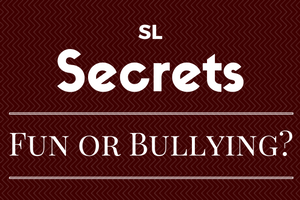 SLSecrets has been a pretty impressive long-standing forum for many in Second Life since 2008 and eventually turned into its own website. Filled with user stories, you could spend ages poring through the plethora of nameless posts.

As stated on the site, it’s meant to be a Second Life version of the (in)famous “PostSecret“, a site where people mail in postcards and other correspondence to tell stories and secrets. But, (and likely to no one’s surprise) SLSecrets became a public forum  mostly for anonymous shaming and what some may consider to be bullying.

Combined with the popularity of people turning to Facebook for Second Life based social media, many posts aimed at ridiculing creators, exes, bloggers and more have become more and more present on timelines since SLSecrets became its own website. It became a way to throw shade without giving up your own identity, or even accuse people of breaching SL terms and conditions.

While it can be a great outlet for some, where do we draw the line between something that is meant to be creative and expressive and something that is yet another way to bully individuals and have it bleed into social media? Most spectators would probably say it’s no big deal and no harm is done, but let the tables turn….would they be happy to have such scrutiny aimed at them?

Should we be encouraging this type of environment when the internet is already full of trolls and critics?