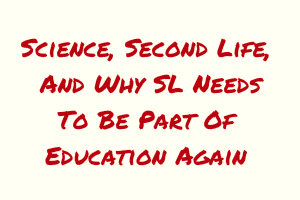 I previously wrote about how Second Life needs to be revisited for its potential to enable teaching a massive amount of people at a time, but what about when outside institutions decide to come in world and observe us? Didn’t know it happens?

Establishments like the Association For Psychological Science have long been curious on the ways of our Residents, often immersing themselves in Second Life to really get a feel of what the people are like (also, like this Rider University student, they chronicled their experiences for research papers)- but their positive revelations are far more pro-Second-Life than the gossipy style magazines that tend to put out uneducated perspectives on how things “really” are in Second Life for the sake of sensationalism- because negative media sells.

But in more recent years there seems to be more of a push for positive insight and journalism. With the efforts of people like Jo Yardley, Draxtor Despres and Strawberry Singh dominating blogs and online media with their Second Life-centric content, it’s causing people to stop and reconsider listening to the negative spouting of those who still try to peg Second Life as a “smut filled world”. With their insightful, driven and well-rounded perspectives it just begs the question: should I just log in and see for myself?

With the advancement of Second Life’s technology since the 2007-2009 years, one can hope that we start to rebuild the steam towards encouraging offline establishments to take a deep dive into Second Life and find out more about why our beloved “home” is a glorious one indeed. It’s far too complex now to just summarize in a simple psychological paper. It’s far too in depth now for anyone of any credibility to just write it off as a place filled with meaningless sex and twisted people. The opportunities to grow and expand your horizons are everywhere.

I would love to see a revival of our presence in the classrooms, as well as the establishments that utilize it. I’ve said this before, but that push to see Second Life as an educational tool has fizzled out over the years- mainly because (in my perspective) the technology wasn’t where it needed to be. However, we are overdue and beyond ready to make this a “thing” again. So what say you? Are you ready to circle back to the educational tool of the future? Where can you see Second Life being applied with Real Life benefits to those involved?