A computer monitor is often kept for many years, even longer than the computer to which it was originally connected. So when it’s finally time to replace your monitor, you may find that that new rules apply to its purchase that were unheard of when you bought it. Here are some of those new rules, without getting too geeky or extravagant…

Time For a New Monitor? 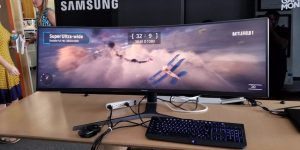 Technology changes rapidly, but when it comes to computer screens, some rules never change. To start with, shop for a monitor in person, and plan to get the biggest monitor your space and wallet permit. Technical specs are often meaningless compared to hands-on experience with a monitor. For example, the screen may be too reflective, or the connectors may be difficult to reach, or the adjustable stand may be difficult to adjust.

When shopping for a computer monitor, size is usually the first consideration. Personally, I would not consider a screen size less than 24 inches. Screens in the 24 to 26 inch range are affordable, and will serve well for most home and office tasks (email, web browsing, composing documents, online video). If you are into photography, graphic arts, or serious gaming like second life, you’ll want a monitor that’s 27 or more inches. Just remember that screen sizes are measured on the diagonal, just like televisions.

My personal preference is to go with triple monitors,( need a graphics card that has 3 or more connections or a monitor hub) and the 27-inch LED monitors I’ve had on my desk the past few years has served me well. I think it makes a big difference in productivity, especially if you use the computer several hours a day. Quite often, I will have a web browser open on one screen, and work database, spreadsheet or graphics program on the other and second life on the third.

Your next consideration is screen resolution. A monitor’s resolution is the number of pixels in its display matrix. You’ll see terms like 720p, 1080p, HD (High Definition), FHD (Full HD), QHD (Quad HD), UHD (Ultra HD), and 4K. These all refer to the number of pixels on the screen, and ultimately how crisp and clear the screen image will be. My recommendation is to avoid anything that’s less than “Full HD” which is a resolution of 1920 x 1080 pixels, equivalent to modern 1080p HDTVs. Quad HD (2560 x 1440) is a step above, and 4K or Ultra HD is top of the line, with a resolution of 3840 x 2160 pixels.There is a sharp price jump between 24-inch full-HD and 27-inch 4K monitors; the former should cost $150 or less, while the latter is probably in the $500 range. (Here’s an ASUS 24-inch Full HD monitor for just $126 at Amazon, and an LG 27-inch 4K Monitor on sale for $398.) If you watch lots of movies or play sophisticated games, the bigger and costlier monitor makes sense. Or, you could put that money into a big 4K television set, and stream your PC display to it.

A curved screen may be helpful on monitors 32 inches or larger. A curved screen puts the vertical edges nearer to your eyes, reducing the amount of refocusing they must do when looking from the center of the screen to one of the edges. Curved screens also reduce the amount of head-turning you must do to view every part of the screen. And they don’t have to be super-expensive. This Samsung 32-inch HD Curved Monitor is on sale for just $258.

The vast majority of consumer monitors sold today use LCD (Liquid Crystal Display) technology. Even in so-called LED (Light Emitting Diode) displays, the LED is a back light behind the LCD panel. LED monitors are helpful when the brightness of the display is critical or room lighting is variable. The most expensive monitors may boast OLED (Organic LED) tech, in which each pixel provides its own illumination.

Another buzzword you may encounter is IPS (in-plane switching). IPS monitors offer deeper blacks and more accurate color rendering than LCD or LED monitors. They also have wider viewing angles, so the picture looks the same, even if you’re not directly in front of it. This ViewSonic 27-inch IPS 1080p Frameless LED Monitor is a good example.

The refresh rate of a monitor is, loosely speaking, the number of times per second that the entire display area is updated. For old-fashioned, bulky Cathode Ray Tube (CRT) monitors, the minimum acceptable refresh rate was 60 Hz, or 60 times per second. Today’s flat-panel LCD monitors use a slightly different metric called the “frame rate,” expressed in frames (images) per second or fps. Most LCD displays are locked at 60 fps, which is adequate for comfortable, flicker-free viewing at resolutions up to 1,920 x 1,080. But 120 fps will make 4K content much more enjoyable. The trade-off is that a faster refresh rate makes hardware work harder and possibly fail sooner.

Computers and monitors often have multiple video I/O ports. Common port types are Display Port, HDMI, DVI, and VGA. A new monitor’s video input port must match the video output port on your computer, of course. Display Port is best for high-end resolutions, but the HDMI standard is the simplest and fastest connection widely incorporated in monitors and computers today. Avoid VGA, which is an older technology. Don’t let ports you’ll never use influence your monitor purchase. 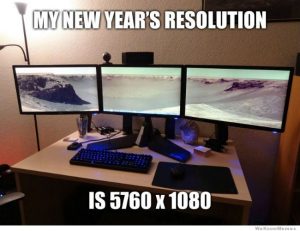 If you run Windows 10, you may want a touchscreen monitor. But don’t get one if you normally sit at full arm’s length from the screen, or further. It’s just too awkward to use a touchscreen at great distance.

The monitor stand should be adjustable to the height and viewing angle that you prefer. Pay attention to have easily the stand can be adjusted, and how firmly it supports the monitor.

Higher-priced monitors may be packed with extras like speakers, front-panel display control buttons, or even all the components of a desktop PC. Buy what you need, not what’s on sale. The fewer things inside of a monitor, the fewer things that can cause overheating and early death.

Finally, read warranties carefully; a five-year warranty doesn’t help if it excludes dead pixels that develop after one year. Don’t buy third-party warranty extensions. They’re pushed so hard by sellers because they are extremely profitable, and they’re extremely profitable because hardly anyone ever qualifies for a replacement under their terms.

Personally, I’ve not found brand to be an important factor in computer monitors. Some people are loyal to ASUS, LG, Samsung, or other well-known brands, but I’ve had no-name monitors that have served me well. Pay attention to the specs I’ve mentioned above, and check consumer forums for experience with specific models before buying, and you’ll do fine.

Thanks Bob R for your input on this subject you rock!

FROM US ALL AT ZOHA ISLANDS HAVE A SAFE 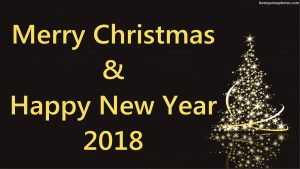