Law enforcement agents need a search warrant before they can seize a person’s historical location data stored by his cellular service provider, the Supreme Court of the United States (SCOTUS) ruled on June 22, 2018. The ruling was hailed as “the most consequential privacy decision of the digital age” by the American Civil Liberties Union. Read on to learn why…

The case before the Court, Carpenter v. U.S., involved a suspected burglar who was convicted based upon months’ worth of location data obtained from his phone company without a warrant. The data gave the FBI nearly perfect knowledge of where Timothy Carpenter went, what he did, who he associated with, and more. Indeed, Chief Justice John Roberts wrote in the majority’s decision,

“(W)hen the Government tracks the location of a cell phone it achieves near perfect surveillance, as if it had attached an ankle monitor to the phone’s user.”

The Court rejected the government’s long-successful argument that when a person voluntarily lets a third party store data about him, the 4th Amendment does not protect him from the warrant less seizure of that data from the third party. This legal doctrine was established in the mid-70s. Today’s ruling, the details of which can be read at SCOTUSBlog, recognized that times and tech have changed dramatically. 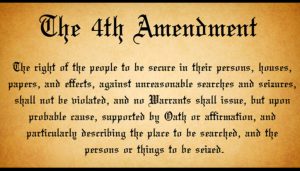 “There is a world of difference between the limited types of personal information addressed” by the old dogma, “and the exhaustive chronicle of location information casually collected by wireless carriers today,” the decision reads. Forty years ago, “few could have imagined a society in which a phone goes wherever its owner goes, conveying to the wireless carrier not just dialed digits, but a detailed and comprehensive record of the person’s movements.”

The Court ruled that the vast amount of location data the FBI collected from Carpenter’s phone company – over 13,000 data points spanning several months of his activities – painted such an intimate and extensive picture of his personal life that it deserved the 4th Amendment’s protection against warrant less seizure. Therefor the location data could not be used to prosecute Carpenter.

The Carpenter ruling applies only to location data collected and stored by a cellular service provider. But the Court’s reasoning will be applied to a virtually limitless range of cases in which third parties collect and store any type of data about an individual. Armed with this decision, privacy advocates can argue that all the personal data that Facebook, Google, credit agencies, banks, et. al., collect about you is now off-limits to law enforcement unless it is obtained pursuant to a valid warrant issued by a court.

The 4th Amendment and Limiting Factors

The 4th Amendment to the U.S. Constitution states: “The right of the people to be secure in their persons, houses, papers, and effects, against unreasonable searches and seizures, shall not be violated, and no Warrants shall issue, but upon probable cause, supported by Oath or affirmation, and particularly describing the place to be searched, and the persons or things to be seized.”

Note that the Court did not overturn the third-party doctrine outright. Instead, the Court decided that there must be a limit to the scope of personal data obtainable without a warrant, and that it was clearly exceeded in Carpenter’s case. Future rulings may decide that the government can use one data point, or a day’s worth of data points, or some other measure of data’s scope, without obtaining a warrant.

The limiting factor seems to be, “Does the scope of data collected amount to invasion of the person’s privacy?” If, for example, Carpenter’s location data revealed that he (or his phone, at least) was regularly at a particular place at the same times a drug rehabilitation group held its meetings at the same place, it would be reasonable to infer that Carpenter was a drug addict in recovery. That inference, arguably, would be a private matter deserving of the 4th Amendment’s protection, so data which supports the inference would have to be seized pursuant to a court order that complies with the 4th Amendment’s requirements.

Yes, it’s complicated, and there are many wrinkles to be ironed out case by case. But the government’s long-standing position that “all your data are belong to us” is no longer acceptable in court. This a huge victory for privacy rights in the United States!

As for Timothy Carpenter, he may be a hero to privacy advocates, but it seems he’s no angel. A description of his role as ringleader of a gang of armed robbers can be found on this page from Findlaw.com. Carpenter was convicted and sentenced in April of 2014 to 116 years in prison, and even though he won his case at the Supreme Court, he will likely remain incarcerated.

That’s because of the “Good Faith Exception to Exclusionary Rule.” According to the Legal Information Institute, The Exclusionary Rule bars the use at trial of evidence obtained pursuant to an unlawful search. If officers had reasonable, good faith belief that they were acting according to legal authority, such as by relying on a search warrant that is later found to have been legally defective, the illegally seized evidence is still admissible under this rule.

The ACLU argued Carpenter’s case before the SCOTUS, and deserves much of the credit for this victory.

We Are Not Out Of The Woods Folks.

Is this limited to just your cellphone? NO!

This will take time. We need to remember our computers and tablets are vulnerable and use various Hot spot Wi-Fi /cell signals and are not protected through this act, and are open for anyone to see with the right hack or so called Court Ordered Warrant! Be careful how you share your information be secure. But in the mean time, A followup story on how to make sure your privacy is secure thru your router and electronic devices coming soon.