VRChat Surpasses Peak Hype Concurrency of 20,000, About Half Using VR Headsets — But Only 5,000 Logging in Via Facebook-Connected Oculus Quest Devices If you check VRChat’s Steam stats (embiggenate above), usage on Steam last weekend peaked a little over 19,000. So only as estimated 5,000 are coming in via Oculus Quest/Quest’s version of VRChat. Adeon isn’t surprised: 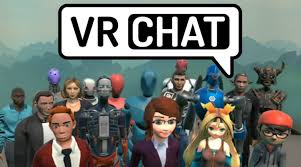 “Confirms a lot what I see too. I have lots of friends that have an Oculus Rift, but still choose to run the Steam version on it, just because of Steam’s social features, and Oculus requires Facebook to have Oculus friends. That’s one major oversight for Facebook. People don’t want to use the platform if its social features aren’t cross play with their friends’ setups.”

It’s an oversight — and a paradoxical one: The main point for requiring Facebook log-in, an Oculus developer recently told me, was to encourage users to interact more in VR with their Facebook friends. (Data harvesting for ads being a secondary goal.) But because so many gamers have strong social connections apart from Zuckerberg’s social network, the Facebook log-in requirement can actually disconnect them from many of their friends.

That to one side, VRChat’s usage growth is impressive. I would not be surprised if its monthly active user numbers have also surpassed that of Second Life as well.

Have a great week from all of us at Zoha Islands Fruit Islands and Eden.