Two storage technologies compete in the hard drive market; one dates back to 1956, the other became widely available to consumers less than a decade ago. As you might expect, the latter is vastly superior in performance. Today, the price difference between them is still significant but narrowing rapidly. Let’s take a look at the venerable Hard Disk Drive (HDD) and its blazing-fast successor, the Solid State Disk (SSD)…

SSD vs. HDD: Battle for the Bits 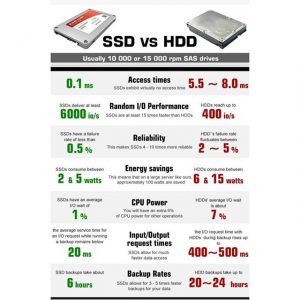 Open the shiny steel case of a conventional HDD and you will find anostalgic array of parts that strongly resemble a vinyl record turntable. There are stacked platters of rigid substrate coated with magnetic particles; the magnetic state of each tiny spot on these disks determines whether it is recognized as a 1 or 0 for data processing purposes.

There is also an armature that moves back and forth across the disk, and at its tip is a sensor called a read-write head, analogous to the needle in a phonograph’s armature. There is an armature for each stacked disk, giving the overall armature the appearance of a comb.

The phonograph’s needle reads the tiny back-and-forth jiggles of a groove cut into a vinyl record to reproduce the sounds that made groove. As it flies over the surface of the spinning disk, the HDD’s read-write head can both read the magnetic state of spots on the disk and change that state to write data to them.

Spinning vinyl records topped out at 78 rpm. The disks in a HDD spin at 5,400 to 7,200 rpm typically; some high-performance HDDs may reach 10,000 rpm. This rotation speed largely determines how fast data can be read and written on the HDD. How much data can be stored on a standard-sized HDD is called its “data density” and is largely a function of the read-write head’s precision plus the speed at which the disk spins.

Electric motors drive all the moving parts of a HDD. The bearings in those motors are the HDD’s Achilles heel, the typical point of failure. When your HDD starts making rumbling noises it’s a sign that its bearings are starting to wear out; when the sound changes to “grinding” disaster is imminent and you had better have a current backup of your data.

It’s All About the Donuts 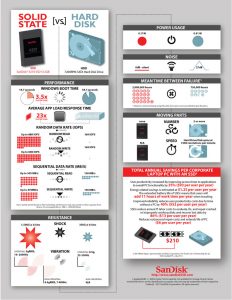 By contrast a solid-state drive (SSD) contains no moving parts. Instead, it is filled with flash memory, the same stuff found in USB flash drives. Think of flash memory as a densely-woven 3-D fabric of crisscrossing wires. At the junction of two wires, electrical current can change the state of a tiny donut-shaped bit of metal; these metal donuts (also called gates) are arranged in a 3-D array.

The electrical state of a gate determines whether it is counted as a 1 or 0. (Each gate can have other states as well, which increases potential data density.) The state of a gate is retained even when electricity is turned off.

Electrons move at nearly the speed of light, so flipping a gate’s state is nearly instantaneous. So is reading the state of any gate given its x-y-z coordinates in the array. So an SSD is silent and supremely fast.

The silence is a blessing and a drawback; there is no early-warning rumbling to let you know your SSD will soon fail. On the other hand, an SSD is nearly immune to damage by dropping or jostling, whereas such shocks can knock the read-write head of an HDD into a magnetic disk to scratch and destroy it. An SSD does not suffer mechanical wear due to friction, so it should last much longer than an HDD.

A Windows 10 PC with an HDD may take tens of seconds to boot up. The same machine equipped with an SSD will boot in the blink of an eye. Additionally, applications that read and write large quantities of data on mass storage work much faster with an SSD than with an HDD. Such applications include gaming, video editing, working with large databases or spreadsheets, and more. But every app that uses mass storage benefits from an SSD. That time saving alone is enough to justify the extra cost of an SSD in many people’s minds.

SSDs come in the same form factors as HDDs, including standard SATA interfaces, so they can be plug-and-play replacements for HDDs. SSDs come in other form factors too: SD cards, memory sticks, and more. Solid state memory is a versatile medium.

Price per gigabyte is one way to measure the value of mass storage, the HDD still reigns supreme. Back in 1981 when the IBM PC debuted, HDD prices were in the range of $300,000 per gigabyte. In 1995, when the Web was young, prices had dropped to $750 per gigabyte. Today, you can buy HDD storage for about three cents per gig. By contrast, SSDs cost about 10 times more per gigabyte.

Gartner Research predicts HDD storage will cost as little as $0.001 (one-tenth of a cent!) per gigabyte in 2021. Will SSD prices continue to drop at the same rate? Time will tell.

Capacities of HDD and SSD drives will continue to grow as greater data density becomes feasible. I can’t imagine needing 15 TB of storage but those who do will be able to get it in SSD or HDD, according to Gartner.

SSD drives do wear out. There is a limit to the number of times the state of one of those “donuts” can be flipped before it simply stops working. Circuitry within an SSD keeps track of the number of times every donut has been flipped, and retires those that are too near their expected life’s end. Over time, less space is available on an SSD due to these retirements. But in practical terms, your computer will probably be obsolete before that happens.

HDDs will always have a place in data processing, the place where low cost per gigabyte is most important. When it comes to performance, shock-resistance, and overall longevity, the future seems to belong to SSD.

When I bought my Dell Alienware computer about a year ago, I ordered a 1TB SSD drive to accommodate (main drive) 3TB hard drive that shipped with it. The Samsung SSD came with software called Samsung Data Migration, which made it super-easy to transfer everything from my existing hard drive, and make the new SSD my primary C: drive. I run Second life firestorm viewer from the SDD and its screams at startup.

The result was pretty dramatic. Startup time was slashed, programs open quicker, and everything just works faster. At current prices and capacities, I would recommend a solid-state drive as an excellent investment for any PC or Mac owner.

Have you moved from HDD to SDD in your computer?