Sanrio Reportedly Licenses Hello Kitty-Branded Content in Second Life; By Far the Biggest Brand to Officially Appear in SL in Many Years Hello Kitty, the ubiquitous kawaii brand from Japanese conglomerate Sanrio, is the second highest-grossing franchise of all time, with $80 billion in total retail sales, and Hello Kitty branded content available in 12,000 locations around the world. And now, reportedly, there’s another location where you can get Hello Kitty licensed content: The virtual world of Second Life.

This is by far the biggest real life company authorizing licensed, virtual versions of its brand in Second Life in many, many years — well over a decade ago, during the 2006-2008 hype wave, when Armani had an official SL store, as did Mini Cooper, among many others. But even back then, no real life brand as big with consumers as Hello Kitty appeared in Second Life — and certainly not a brand as family friendly as Sanrio, given the virtual world’s very adult reputation.

I say “reportedly”, by the way, because despite asking twice, I haven’t been able to confirm this licensing agreement from Sanrio’s United States media rep. However, Astralia’s brand owner, who goes by the avatar name “Astralia Resident” in Second Life, insists she has a contract with the company: 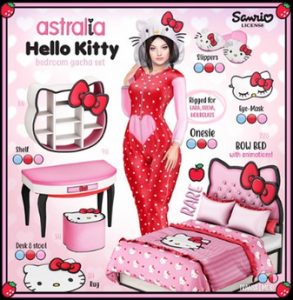 “Astralia is a real life registered company and we made an agreement for the use of the Sanrio characters in Second Life,” she tells me, but declines to discuss details beyond that. “The terms of the agreement are under NDA.” She also encourages me to get in touch with Sanrio to confirm the deal.

I am still seeking a confirmation from Sanrio since that is in itself would be newsworthy — and also, because non-authorized use of RL brands in Second Life is rampant. (There’s even a Hello Kitty tattoo in the Marketplace that doesn’t appear to be official.)

“I understand your concerns because IP infringement in SL is sadly very common,” Astralia acknowledges. “Mine is an established brand, I have a reputation, and there is a difference between just using a Hello Kitty image or shape or pattern on the products, and claiming to have an official collaboration, with a license logo on the vendors.”

This is true. And from what we know now, Astralia has scored quite a coup .

Have a great week from the ZI Staff