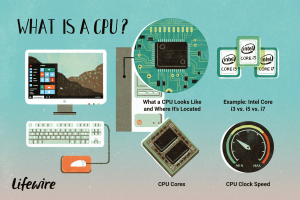 When buying a car, what’s under the hood may matter a lot to you; or it may not. Some people don’t care how many cylinders an engine has as long as the car has leather seats, remote start, and the test drive is satisfactory. The same is true when buying any computerized device, be it a desktop PC, notebook, tablet, smartphone, or digital wristwatch.

This article is for readers who like to know what’s under the hood. We’re going to look at what a CPU is, what’s in it, and what really matters when comparing specs instead of hands-on performance.

The “engine” of a computer is its CPU, which stands for “central processing unit.” Physically, a CPU is a circuit board loaded with electronic components that talk to each other and, through hardwired channels, to other parts of the device. Each component is in a CPU for the same reason pistons and timing chains are in a car’s engine: they work best when they’re as close to each other as possible.

Two typical CPU components are the Arithmetic Logic Unit (ALU) and the Control Unit (CU). An ALU does the simple math that is the foundation of all digital computing: it adds and subtracts, that’s all. Combinations of many such simple operations, executed at lightning speed, yield multiplication, division, exponentiation, and even more complex computations. The CU inserts “math problems” into the ALU and extracts solutions that are passed to other components.

The Clock is Ticking… 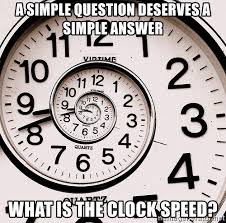 The clock or “timer” provides an electrical signal that regulates the speed and timing of data flow and computations. To avoid errors, it is essential that data arrive at the point where it is to be manipulated at the right time; you don’t want to start calculating the square root of a number before the number arrives. (Yes, computers are dumb enough to try that, if unregulated). Regulating the clock speed also prevents overheating; the faster a CPU works the more waste heat it generates.

When comparing CPUs, you’ll see clock speeds measured in GHz (gigahertz), and ranging from about 2.0 GHz to 5.0 GHz. Back in the day, you could assume that a higher clock speed (more gigahertz) meant a faster CPU. But because there are two major chip vendors (Intel and AMD), and multiple CPU families offered by each (such as Intel’s Xeon, Intel Core i3/i5/i7/i9; AMD’s Ryzen, Athlon and FX), you can’t assume that any longer.

Down to the Core

If you have an aging personal computer that’s struggling to keep up with modern apps and operating systems, should you junk it and buy a new one, or upgrade its capabilities? Will a new monitor, more memory, or a faster hard drive make you happier than a CPU upgrade?

So far we’ve discussed the three essential components that comprise a basic CPU: the ALU, the CU and the timer. This bundle is often called a “core processor” or simply a “core.”

Today, many devices contain multiple cores. Each works on one part of a computational job and feeds its result to another component which combines results from all cores to produce a whole solution. This process is called multi-processing, and it’s de rigueur in modern devices.

Generally speaking, the more cores the better. You can buy CPUs with two, four, six, eight, sixteen or (if you’re really rich) thirty-two cores. But to continue with the car metaphor, you don’t need a 16-cylinder race car for runs to the grocery store! Most desktop users will be quite satisfied with a 4-core CPU, such as those in the Intel Core i3 series. The Intel Core i5 CPUs can sport six processor cores, and the Core i9 can have up to eight processors. AMD’s Ryzen series has 4, 6, 8, 16 and 32-core models.

The “cache” of a CPU is a block of RAM (random access memory) used to speed up data access. Ideally, it stores the most frequently accessed data stored in the “main memory” RAM chips that are separate from the CPU. Cache memory is used to minimize the amount of time required to copy memory from RAM to the CPU. Those tiny fractions of a second add up when you’re doing billions of calculations per second.

Faster and larger cache memory is always better, but the amount of cache memory that you need depends on how much data is typically moved at one time. A Word document isn’t nearly as big as an HD video file. Handling email doesn’t require the lightning speed that a gamer wants.

When comparing CPUs, you may see mentions of L1, L2, L3 Cache. L1 cache is always tiny, ranging from 32 to 640 KB (not megabytes or gigabytes). L2 and L3 cache numbers are more important. Honestly, I’ve never paid much attention to these figures, because I’m not crunching numbers for NASA or killing armies of invading zombies. But if you want to build a hot rod, look for L2/L3 cache numbers that are 10 MB or higher. Interestingly, Intel’s web pages describing the latest processors don’t even mention cache levels. Instead, they speak of Intel® Smart Cache, with figures ranging from 12MB to 16MB. Just be aware that more cache will mean more cash, and you probably won’t be able to tell the difference in most cases. 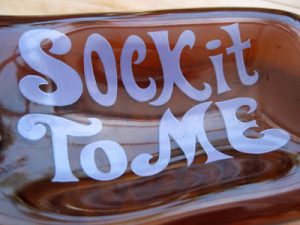 All the data that moves in and out of a CPU needs a road to travel on. Actually, there are many roads consisting of short, thin wires sticking out of the bottom of a CPU. These wires plug into sockets in the motherboard, completing connections that allow data to flow to different components (graphic processor, hard drive controller, etc.).

Various socket configurations have arisen over the years that improved data flow in different ways. You would have seen names like Socket 1 through Socket 7 on 486 computers in the early 1990s. Since then, an alphabet soup of socket names and numbers have arisen. You’ll only care about the socket type if you plan to upgrade your motherboard with a bigger, badder CPU. You’ll need a CPU that’s compatible with the socket on your motherboard, unless you plan to swap them both.

Bottom line, clock speed, the number of cores, and the amount of cache memory are all factors to consider when choosing a CPU. But so is price, and the intended use of your computer. And remember that those numbers should only be compared within a processor family.

Will you be able to tell the difference between an Intel Core i7 and an i9 while you’re on Facebook or watching cat videos? Will an 8-core AMD Ryzen beat the pants off a six-core Intel Core i9 while playing World of Warcraft? My best guess is maybe to both. This article was meant to help you understand the jargon involved.

Have a great week from all of us at Zoha Islands and Fruit Islands.