Click here this month to teleport into yet another Second Life landmark that’s going away: The luminously beautiful island called Tempura, which since its inception 14 years ago, has attracted well over 2 millions visits.

It is, however, leaving the virtual world grid at the end of this month. Owned and lead created by Japanese SLer “Kikunosuke eel”, Tempura is a dreamscape of forests, gardens, and ancient buildings. But with his real life work taking up more of his time — and Tempura costing him well over $2000 a year in landlord server costs to Second Life owner Linden Lab — Mr. Eel decided it was finally time for Tempura to end.

For all these years, he subsidized Tempura at a loss, partly subsidizing it through sales from MANDALA, his virtual jewelry brand. Completely free to visitors, it’s been full to near capacity since launching, with thousands visiting and exploring every week.

Mr. Eel subsidized their visits despite the expense as an expression of personal faith: 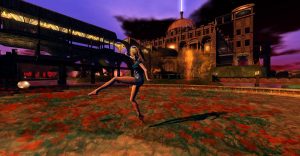 “Tempura brought me better things than profit,” as he explained in a translated note. “My philosophy is based on Buddhism, and it influences me a lot. I’d always like to share happiness with many other people, even if it’s a small happiness. I might not be able to do a great thing for them [in the real world], but I feel good if I could touch others’ hearts in any way.”

It is fair to say that he has succeeded at that.

Linden Lab, sad to say, has not: Extremely high sim tier costs, even years after the entire virtual world grid has moved to the Amazon cloud, continues to bleed the existing culture.

Mr. Eel says he may eventually relaunch Tempura, but until then, after this month, its digital existence will be confined to social media posts like this.

As to a question that’s somewhat perplexed me for these last 14 years: Why name this lovely island after tasty deep fried vegetables and sea food coated in panko crumbs?

“I do not know if I could explain this well to foreigners,” says Mr. Eel via another translated message, “but I will try. The word was associated with a slang buzzword in Japan which describes a feeling of cheerfulness, excitement, or energy. And tempura is also a well-known Japanese food. So I came up with the name, TEMPURA, which people from all over the world could easily remember.”

Thanks to Tempura manager Polly Reina for help with this story!