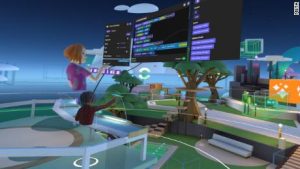 An older post of this story was slated to post October last year we decided to run it now with updates.

Facebook’s latest futuristic idea, which the company says it wants to build with a team of 10,000 new hires in Europe, sounds like a fancy new version of the mid-aughts virtual reality desktop game Second Life, only with Zuckerberg watching your online travels.

It’s internally being called “the metaverse,” though that might not be the name that sticks. In a blog post on Sunday, the company says it’s “a new phase of interconnected virtual experiences using technologies like virtual and augmented reality.” And, “At its heart is the idea that by creating a greater sense of ‘virtual presence’, interacting online can become much closer to the experience of interacting in person.”

This appears to be the next phase of the company’s investment in Oculus, and VR and AR tech in general. And for a few years Mark Zuckerberg has been talking about new applications for the technologies, like being able to redecorate a room in virtual space, or have virtual sit-down visits with people across the globe.

The blog post, which is bylined by head comms guy Nick Clegg and Vice President of Central Products Javier Olivan, also seems intent on blowing some sunshine up the arse of the EU, generally.

“We have long believed that European talent is world-leading, which is why we have invested in it so heavily over the years,” the post says. “Beyond emerging tech talent, the EU also has an important role to play in shaping the new rules of the internet. European policymakers are leading the way in helping to embed European values like free expression, privacy, transparency and the rights of individuals into the day-to-day workings of the internet.”

So, this is also an announcement of a recruitment effort, with a focus on specialized engineers in Germany, France, Italy, Spain, Poland, the Netherlands, and Ireland.

“We look forward to working with governments across the EU to find the right people and the right markets to take this forward, as part of an upcoming recruitment drive across the region,” Clegg and Olivan say.

As the Associated Press notes, Facebook has made a number of pie-in-the-sky projects public that haven’t yet become realities, not the least of which is Facebook’s foray into cryptocurrency — which faced huge backlash from EU regulators, and which would also be a key component of making the “metaverse” profitable.

Game-maker Epic Games, creator of Fortnite, is also working on a “metaverse”-type project, and other companies may be as well. And it should be noted that the virtual economy within Second Life itself, bolstered by NFTs and a longstanding crypto marketplace of its own, boomed during the pandemic, which Facebook no doubt was watching. And Facebook acknowledges in their announcement, “Bringing this [project] to life will take collaboration and cooperation across companies, developers, creators and policymakers.”

But will anyone ever be satisfied with virtual meetings or virtual “vacations” with family, that are essentially just Zoom calls in Second Life? Some segment of the population may always be more excited about living as an avatar in virtual space, but is this something that most people are ever going to be truly comfortable with? And isn’t this just another potential forum for harassment and abuse that Facebook won’t be able to adequately combat?

Of course Facebook wants a big hand in such a project, and the EU ass-kissing is a strategic first step, given that Facebook has a lot of critics across the pond who will want to put the kibosh on the company trying to infiltrate our lives any further than it already does.

If you are looking for updates to this story well like most of the “Metaverse” you won’t see one soon. It seems Metaverse however starting out fast found out what everyone else suspected they are WAY off timing on this project and by at least 5 years. Stay tuned! Just kidding don’t hold your breath for “Metaverse” to ever be close to what Second life is or ever was. Just an opinion but seems to be shared by many.