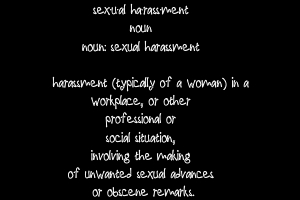 Probably one of the most frustrating things that happens in Second Life is the sense of entitlement that people carry, assuming that just because we’re in this virtual space all etiquette goes out the window. Some may argue that “it’s just a game” or that their roleplay style is of someone that is simply unsavory…..but in either case, there’s no real justification.

Some of these behaviors carry over to social media as well, where many of us have accounts designated as “Second Life only”. In either scenario, I have personally been subjected to a lot of really unappealing behaviors. Here’s three simple tips on what NOT to do.

Guys, this is definitely directed towards you, and I say this in the nicest way possible. If someone wants to see your junk, we’ll ask. Not once when I’ve received such a picture (and it’s happened countless times) have I asked, implied or demanded such a heinous gift. Also, bear in mind, THIS IS THE AGE OF THE SCREENSHOT. There’s nothing stopping any of us grossed-out recipients from passing that along, even if you send it in-world with no permissions. You’re aware of the glory of Gyazo, right? Your pictures are not sacred and probably shared repeatedly. Don’t make it a bad one.

Just because we have these profiles that we put a lot of thought into and names displayed over our heads does not mean you know us upon spotting us. It also doesn’t mean you should walk up to someone and talk about their ample bosom or derriere. That’s a quick way to get an equally unsavory response….unless you’re into that kind of thing. The irony of this is that I never got statements like these in places where you’d expect it, but at “classy” establishments or otherwise non-sexual areas. The strange thing about this is that the offending person always seems surprised when they’re not received positively.

3. Don’t assume we’re all here because we’re interested in sex.

Second Life has different meanings for different people. Sure, there are people who think it’s just a sexual playground, and there are some on the opposite end of the spectrum that find quality socialization and family structure to be their driving force. So, unless you’re specifically in a place that promotes totally carefree sexual encounters, it’s usually better to err on the side of more…..civilized introductions. It’s not uncommon to have someone approach you and flat out ask if you want to have a romp. Just don’t be that person.

Long story short, if you don’t know boundaries and haven’t been clearly instructed that any of the above is acceptable, it’s usually safer to play it safe and have….you know….a normal conversation.