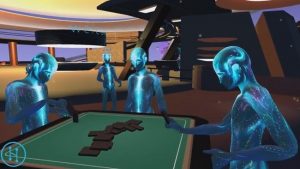 Years come and go but the question remains always the same: what the virtual worlds are concretely useful for? Virtual worlds like Second Life, that despite it’s not to the top of the fame anymore still attracts 900 thousand players a month, Sansar, the so called “new” Linden Lab‘s project that should start its open beta full on January, or High Fidelity, the new adventure of Second Life’s “daddy”, Philip Rosedale, that started already its open beta with 69 virtual worlds online at the moment. 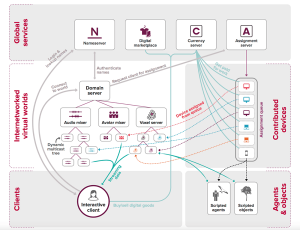 That’s why High Fidelity is peer-to-peer, it was designed as a system of interconnected servers to realize a virtual world even wider than the real one, intended to resolve two of Second Life’s most persistent problems, scale and latency (since Second Life was built on Linden Lab’s servers it suffers of persistent lag problems and can’t host more than 40 avatars contemporary in a single sim), making money by charging a fee for domain registration, i.e. by acting as a “Go Daddy for VR”.

In order to do that and to give way to the people “to build anything they want” this time Philip Rosedale decided to develope an open platform, the opposite of Second Lilfe and of what has decided to do Ebbe Altberg with Sansar, developed as a closed platform for single experiences, to make possible to realize a crowd of virtual settings on small scale.

Alberg has invested a lot on Sansar, directing it towards VR as soon as Oculus Rift was bought by Facebook in March 2014 for 2.4 billion dollars: “we knew that people were going to want to create content” for VR in massive quantities, which right now “it’s too damned difficult” underlined Linden Lab’s Ceo on Wired.

Less defined of in terms of graphic details, Sansar compared to High Fidelity appears to be based on a consumer-facing approach rather than a geek approach and as if in the case of the Philip Rosedale’s platform even Sansar wants to give the possibility to players to create their own VR content, its settings can be replicated, not connected.

Basically if two school group are visiting the VR reproduction of an Egyptian tomb, both can contemporarily wander inside, but they won’t be seen and they won’t interact among them because they will be in two identical but separate settings. Spaces that, like the current internet sites can be owned by big corporations or by individuals.

Even VR content management will be different between High Fidelity and Sansar: while in High Fidelity users will be able to create and modify contents inside the platform, just as Second Life users do today, in Sansar it will is necessary to create or to modify the contents to the outside, for then to import them in the platform.

On the other hand this will reduce the necessity to memorize contents and will make useless the same idea to have to install and to interconnect servers among them as for Second Life (and High Fidelity). More similar to a game and less to the properly said virtual worlds, maybe, but Sansar will be enjoyable from that vast mass of consumers who doesn’t necessarily care to create contents, but rather to enjoy of it.

What virtual worlds are for?

Altberg and Rosedale regularly meet, to discuss of their own projects and of corresponding visions about the future of virtual reality, they are “frenemies” according to a definition of Altberg. Who knows if comparing themselves they will succeed in finding an univocal answer to the question: what virtual worlds and virtual reality are for, other than to realize beautiful graphic contents?

Till now with over million VR headsets sold and the New Oculus Go and early 2019 Oculus Quest sure to peek more interest still nobody is able to say it for sure, nor to ensure that, passed the initial enthusiasm, you don’t forget VR as already happened at the end of the eighties.

I say try it for yourself see what the hype is VR has come a long way since the first Oculus Rift was born. And although its still in infancy with High Fidelity and Sansar it still holds my interest  as there is so much more that is going to happen and I want to be there as both VR worlds develop. Also there are some really cool things you can do with Oculus such as Live concerts and sports, Realistic gaming and some virtual interactive movie’s that will scare the proverbial crap out of most.

Zoha Islands will be seeing you in VR real soon