Fascinating study from researchers with the Donders Sleep & Memory Lab  in the the Netherlands suggests that VR helps prime the user to have more lucid dreams — you know, the sensation of being conscious while in a dream, and even having some control over what happens in the dream itself. VR inherently cues a user to keep questioning whether the things they are experiencing while wearing a HUD and motion capture rig are real or not. And that constant Cartesian awareness, the researchers theorized, might bleed over into the VR user’s dreams.

To test this, they put volunteers into a VR rig and had them play a number of dream-like VR games. Then, they put the users in a realistic “normal” cafeteria setting in VR (pictured above)… but then made that simulation become increasingly strange and dreamlike: 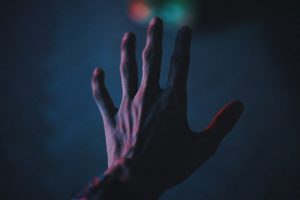 Every early session (first two weeks) included the custom-made ‘Spinoza Café’ scenario which involved performing the role of a waiter or waitress—delivering food to customers in the university canteen—which became progressively bizarre (clocks running backwards; customers suddenly staring at the participant or changing into mannequins; gravity failing) under control of the researcher. To increase the dream-like character, changes occurred outside of the field of the participants, i.e. they did not directly witness any changes, but only the result of the change when moving their gaze/attention to a different field of view. This produced an aesthetic which closely resembles dreaming, since alterations to working memory (among other cognitive changes) render otherwise intrusive, non-sequitur inconsistencies frequent and unremarkable from within the dreaming state.

VR training led to statistically significant increases in dream lucidity compared to the passive control group… It therefore stands to reason that the tentative gains seen in the VR group could be explained through a combination of several overlapping factors: dream-like VR scenarios provided a training ground for meta cognitive reflections; bizarre and novel VR content was subsequently incorporated into participants’ dream imagery; and this reminded them of the study goal when noticed. It is further worth considering whether the VR experience itself could have exerted some dissociative effects, which prospectively provided a fertile and convincing (dream-like) psychological state from which to question one’s reality, as part of the required lucid dreaming training.

In other words, the very fact of the experiment might have been the thing that helped prime the lucid dreaming. There are many more qualifications to the study’s results which you can read here, and they should be replicated by other researchers before jumping to any conclusions.

That said, this could be another positive effect created by VR: Not only giving us more imaginative options during our waking life, but while sleeping, and we feel like passive observers in the random experiences created by our subconscious, help give us more agency.