ZoHa Islands would like to take this opportunity to spread the word about this new event on Thursday, the 14th February 2013 called ‘One Billion Rising in Second Life’.

On February 14, 2013, for 24 hours starting at midnight SL Time, Second Life residents will join with activists around the world in a spectacular 24-hour dance event for ONE BILLION RISING, the largest day of action in the history of V-Day, the global activist movement to end violence against women and girls.  The event sounds fantastic and should be an exceptionally and equally amazing turnout – and for such a wonderful cause.  For More info on this cause and how to support in RL please visit The V-Day Official Website.

There will be a giant 4 sim stage where over 200 avatars can enjoy the live music and fantastic art/info exhibits.

Region preparations are underway and now there’s only 2 days remaining until the 24 hour dance event gets started. 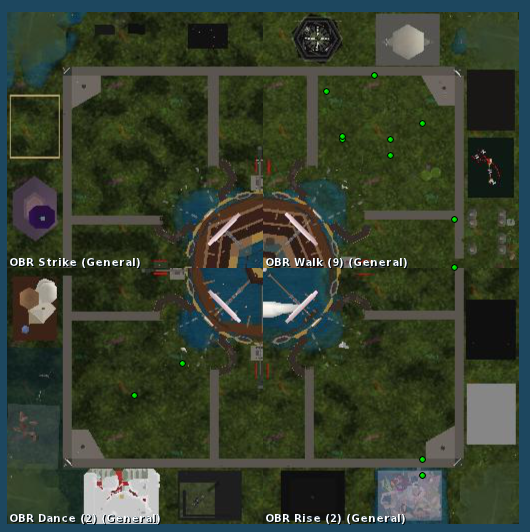 On 9th February 2013 a inspiring new video preview was uploaded on YouTube for the upcoming One Billion Rising in Second Life event due to take place for 24 hours on Valentines Day 2013. This wonderful video lasts for 5 minutes and 37 seconds showing many women avatars dancing to the music.

Tena Clark and Tim Heintz perform the incredibly powerful song, “Break the Chain,” that we hear in this video. As women from around the world in Second Life, we wanted to do our part too. Gorgeous settings, amazing women-behind-the avatars, and a bit of fantasy make our video a beautiful addition to the tide of support that’s sweeping the globe. Visit our blog, “One Billion Rising in Second Life” to find out more!

“Come and dance! One Billion Rising in Second Life!

On February 14, 2013, for 24 hours starting at midnight Pacific Standard Time, Second Life residents will join with activists around the world in a spectacular 24-hour dance event for ONE BILLION RISING, the largest day of action in the history of V-Day, the global activist movement to end violence against women and girls.

ONE BILLION RISING began as a call to action based on the staggering statistic that 1 in 3 women on the planet will be beaten or raped during her lifetime. With the world population at 7 billion, this adds up to more than ONE BILLION WOMEN AND GIRLS. On February 14, 2013, men and women in Second Life will join activists, writers, thinkers, celebrities, and people across the world to Walk, Dance, and Rise as a show of unity, individual strength, and the need for change.

The Second Life event will feature a four-region stage where 200 people can dance together, surrounded by an area of art installations and informational exhibits. A variety of performers will play over the 24-hour period, enabling people all over the world to attend this virtual event no matter their timezone. The regions will have a General maturity rating to allow all residents an opportunity to participate. Pictures are welcome on the event’s Flickr group.

The objective of the event is to raise awareness, not to raise funds; however, information about real-world organisations will be available for those wishing to donate.

About One Billion Rising
One in three women on the planet is raped or beaten in her lifetime. That is ONE BILLION WOMEN violated. One billion daughters, mothers, grandmothers, sisters, lovers and friends. On February 14, 2013, V-Day’s 15th Anniversary, we are inviting ONE BILLION women and those who love them to WALK OUT, DANCE, RISE UP, and DEMAND an end to this violence. ONE BILLION RISING will move the earth, activating women and men to dance across every country.

For more information go to http://www.onebillionrising.org/.

About V-Day
V-Day is a global activist movement to end violence against women and girls that raises funds and awareness through benefit productions of Playwright/Founder Eve Ensler’s award winning play The Vagina Monologues and other artistic works. In 2012, over 5,800 V-Day benefit events took place produced by volunteer activists in the U.S. and around the world, educating millions of people about the reality of violence against women and girls. To date, the V-Day movement has raised over $90 million and educated millions about the issue of violence against women and the efforts to end it, crafted international educational, media and PSA campaigns, reopened shelters, and funded over 14,000 community-based anti-violence programs and safe houses in Democratic Republic of Congo, Haiti, Kenya, South Dakota, Egypt and Iraq. Over 300 million people have seen a V-Day benefit event in their community.

For more information go to http://www.vday.org/.

Please help promote this event by using the SHARE buttons below!