Clearly, this has been a tumultuous week for America. With the highly-publicized murders of two black men at the hands of the police to the heartless execution of dedicated individuals in uniform, I think it’s safe to say that we’re collectively overwhelmed.

The reality is, however, this is nothing new. We just now have the technology to share these incidents. Second Life is no exception.

Last week I had made a decision, before this incredibly horrific chain of events began, to create an interactive Black History Museum in an iconic part of Second Life. It’s been something I’ve wanted to do for enlightenment and tribute, and it especially is going to highlight the modern-day struggles that are going to be very much an integral part of our history when our kids reach our ages.

I kept the building in theme with the land, made a tasteful sign, and had been driving myself crazy learning about scripting so I can make this a very unique experience for those who choose to peruse the exhibits. However, while working on the interior I noticed that my neighbor (a well-known RP police officer) decided to put up a wall around his property, and then a courthouse to block the entrance without a word. 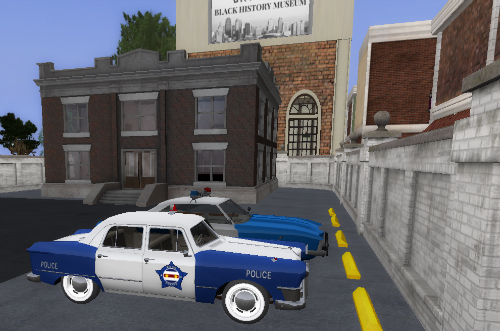 I could have been angry; could have thrown a fit. Instead, I continued to work on my scripting. It’s the exact type of passive-aggressive behavior that I am used to receiving, and it was only more motivation to make the museum the best it can be.

I also watched as a well-known figure in Second Life bravely shared her own experience with religiously insensitive remarks in response to a gorgeous post that she put on Flickr for Eid. While many rushed to chastise the person who had the nerve to be a jerk, that really is just the tip of the iceberg when it comes to contemporary discriminatory mindsets…..especially online.

While I love Second Life and social media SO MUCH, it also illustrates how enabling it is when it comes to people that normally would keep their raging bias under wraps. I had someone in-world call me “tampon nose” because of my wide nostrils, or tell me my experience with bias is invalid because I’m a “mixed breed” (what am I, a friggin dog?). Today, the topic of lynching came up and a well-established figure in the Second Life community felt the need to joke around about it in a group, then later said she was trying to be lighthearted about it.

Lynching needs to be joked about? I’m sorry, does it make you uncomfortable, thus pushing you to resort to insensitive humor? You do realize that, even this week, it’s still happening? That’s exactly why the conversation must be had.

We live in this moment of easy distractions by the next thing that’s trending. People decided to focus on Pokemon: GO instead of remembering that there was a critical series of events this week that must not be ignored. While people of color were becoming more vocal about their experiences and rage, others were saying “Oh look at this Squirtle” or “I’ve had enough negativity, I’m going to avoid these things and just talk about happy things”.

As a person of color, I don’t get to just avoid it. It’s the life I live. The rest of the world is looking at the US like they’ve lost their minds and travel advisories are starting to pop up. A good friend of mine RL told me that her UK class was supposed to go to Kentucky for a class trip. They cancelled it, due to too many students being black.

So, what I’m trying to say is, don’t be one of those people that is insensitive because you don’t want to be bothered with understanding what this reality is for many of us. Don’t be that person who goes #ALLLIVESMATTER when you see a #BLACKLIVESMATTER post, especially when you don’t need to stress about going to a convenience store or be scared over a trivial traffic stop.  Don’t be that person who force feeds insensitive jokes because you think you’re entitled to be a jerk. Be that person that tries to become enlightened. Be that person that can be a small part of a centuries-overdue solution to a lapse in humanity.

Being online doesn’t give you a free pass to forget humanity.