EEP—Linden Lab’s Environmental Enhancement Project—is here.  The EEP Firestorm viewer is now available as a public beta viewer. Linden Lab is hoping to get feedback from our user community and the Firestorm team highly encourages you to file bug reports on LL’s Jira here.

Before you ask, this is NOT a required update. It is a beta viewer and will not count against Firestorm’s 3-available-versions rule. You do NOT have to uninstall your current Firestorm, and in fact we suggest that you keep it. The beta viewer will install alongside your existing Firestorm on a separate channel (on Windows).

As many of you know, Linden Lab’s Environmental Enhancement Project has been in the works for a long time and reached the grid in 2019. While the official SL viewer has had EEP for a few months, Firestorm has been working to eliminate bugs in our own implementation and streamline/improve the interface. While we don’t feel that EEP is ready for full release—in fact, it has not passed our QA yet—Linden Lab wants all SL users to have access to it, and many of you have been clamoring to use it.

EEP is a new environmental lighting system, a change from the previous Windlight system. Sky, Water, and Day Cycle settings are now saved as inventory items (assets), and can be created, copied, transferred, or sold the same as other inventory assets.  EEP settings can be applied to the land by parcel or region owners, or to yourself as personal settings visible only to you.

Note: Windlight still works in viewers 6.3.9 and older, with a few bugs due to server changes. 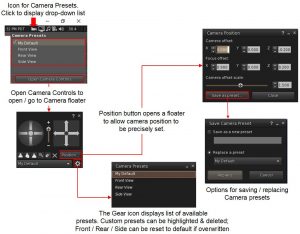 See https://wiki.firestormviewer.org/fs_645_prerelease for the full list of new features.

Even though it hasn’t been long since we released Firestorm 6.3.9, this one comes with a lot of bug fixes. Below is a list of just a few key things we feel folks will appreciate. For a more thorough list, please see our 6.4.5 PRE-RELEASE NOTES.

As an entirely new environmental system, EEP still has bugs to be worked out. You may see strange lighting glitches. Some have experienced reduced FPS. We hope that everyone trying this beta viewer will review the list of known issues and file bug reports to help us improve the viewer for you.

For OpenSim users, there are 3 key points:

In addition, our last OpenSim Release had a bug that caused crashes when rezzing items. This bug was responsible for 70% of all reported FS OpenSim crashes on the 6.3.9 version, and it has been fixed.