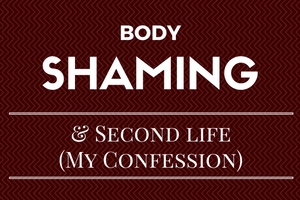 Now, I don’t write this as someone who has never done it, so I’m making it clear that I’m not coming with an air of never having engaged in an infraction. But as I have been working towards my own health and fitness goals outside of Second Life, I’ve become more aware of how we sometimes treats virtual selves in-world.

The beauty of Second Life is your ability to be able to be whatever and whomever you decide to be. Some of us stay 100% in-character, and at the other end of the spectrum, some of us want to 100% emulate our real selves. However, the majority of us do fall somewhere in the middle.

I’m incredibly guilty of being a shamer, and I don’t say this without a sense of regret, even though it wasn’t my style to say it to someone directly in the form of an insult- but I’d joke about it with my close friends. It always seems harmless, but then you eventually have to take a look at how that does turn into a bit of a Domino effect. Your friends easily chime in and think it’s okay, and then it enables them to also engage in that type of behavior, and eventually someone has the nerve to say something directly to some poor soul that didn’t deserve it and it crosses into bullying territory.

And we forget ourselves even more when we mock people that are simply exercising a very basic Second Life freedom: to be whatever and whomever we want. Sure, someone might want to have a totally disproportionate body that would be unrealistic in the real world, but that’s okay. Sure, someone may choose a character that we just don’t understand- but that’s also okay. That is what we get to do, just like some that may seem extreme to us may find our “logical” avatars incredibly boring.

What and who we choose to be isn’t supposed to be to please the masses, and that’s something that very much applies in the real world as well. It’s not supposed to be a popularity contest. If someone finds joy in something we don’t understand, then we really ought to just be happy that they’re happy and move the heck on. If you decide to be fully mesh and someone else doesn’t, let them. I almost feel like it would easily be a virtual social experiment to spend a day wearing nothing made after 2006 and seeing how differently you’re treated.

The reason I say my real world experiences as of late made me aware in Second Life is pretty simple: I’m an obese person who spends an hour and a half a day walking upwards of 4 miles (not record speed, mind you) around my neighborhood. Very often, people invite themselves to make passing comments about my body or what I’m wearing or even how my hair is done, or laugh among their friends as I pass by.

And that’s exactly how easily this happens in Second Life.

Let people be who and what they want to be. Be supportive; don’t be part of the plague. I’ve made this mistake many times over, and now that I’ve been on the receiving end, I’m doing my part to be more aware and respectful.